Father’s Day Special: The Journey of Men in Quilting

In an industry where you only see one or two men for every 100 quilters, you might think males feel slightly out of place in the quilting space. However, they don’t see a difference. They just see themselves as playing their part – contributing their ideas to make a difference in the lives of quilters.

From humbling beginnings to evolution of thought, the men who have grown to be leaders in the quilting industry didn’t always want to make the art part of their lives. 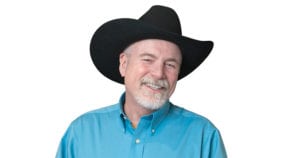 Take Ricky Tims for instance. Now a quilting celebrity and co-host of The Quilt Show, Ricky had no interest in quilting until his grandmother got married at age 83. His grandmother loved her sewing machine, but once married, she decided it was time to part ways with her old friend. Ricky, not wanting the machine to go to a stranger in a yard sale, decided to take the machine for himself.

With the new machine at his disposal, he figured he might as well check out the local fabric store and maybe get some use out of his new toy. Instead of picking out some fabric to sew some new clothes as he initially planned, he decided he was going to try his hand at making a quilt.

It was at this same time that Ricky’s father, Richard, had just retired and needed a new hobby. After weighing the options of stained glass artwork and quilting, Richard chose quilting – without Ricky’s knowledge or knowing that Ricky was making the same jump. As you can imagine, that made for an interesting conversation the next time the two talked, as the main message they brought was “You probably won’t believe this, but I actually just started quilting.” Ricky recalls the conversation being a little odd, to say the least.

The pair collaborated years later to create a prize-winning quilt – Dad’s Lone Star. Richard made the quilt and Ricky created the setting and designed the appliqué. To Ricky’s knowledge it is the only father-son quilt to win major quilting awards. 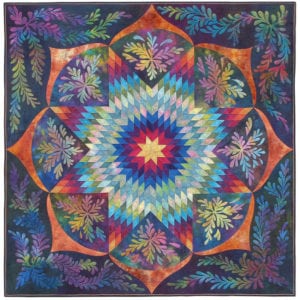 We love that Ricky has used the medium of quilting as his artistic expression, although he is quick to say he does not view himself as an art quilter. Among the styles he’s proudest of pioneering are his Rhapsody and Convergence genres, partly because they’re so different and appeal to different types and skill levels of quilters. He describes Rhapsody as “legacy” and “ornate” and Convergence as “identifiable, fun, quick.”

Ricky still quilts nowadays, but he views himself primarily as a teacher. Aside from constantly traveling to spread his quilting knowledge at workshops, he found a small town in Colorado he likes to call “a little heaven” that’s immersed in art culture. It’s called La Veta.

It is here that Ricky hosts his quilting retreats, which are uniquely taught by a single instructor – Ricky himself. While he has been involved in the traditional 1-to-2 day retreats, he feels the extended retreats are more fun for him and give his students more of an opportunity to explore their creativity.

“I see students’ potential and get to know them, but then they’re good and gone,” Ricky said of traditional retreats. “With a longer retreat, it’s about an internal journey.”

Part of that journey is quilting, while part of it is getting away from the everyday routine of family, cooking and housekeeping to focus on their projects, Ricky said. “It gives a spark of revelation.”

Aside from allowing them to explore their creativity, Ricky says the workshops give him the ability to act on his appreciation for women and what they do for the world.

Finding a Home in Quilting

For AccuQuilt Educator Richard Tharp, quilting was always in the cards. From a very young age, he remembers helping his grandmother and nine other family members with their projects, mainly cutting out pieces. “It all leads back to my quilting roots in Kentucky,” Richard says about his career today.

His first professional positions were in the garment industry and as a quilt designer in Louisville, a role in which he remembers developing his own numbering system for the 4,900 pieces that were required to finalize the quilts.

He continued to display his passion for quilting when he moved and opened his own art gallery in Galveston, Texas. Richard makes a point of joking that this was his first (and only) time that he put his Art History degree to good use.

Unfortunately, the gallery came to an unforeseen end after Hurricane Ike made landfall in Galveston in Fall of 2008. Richard made it to safety, but the same couldn’t be said for his business. He recalls returning to feet-upon-feet of standing water after the storm had passed. It took more than a year of recovery to recoup his home. The gallery, which was closer to the shore and suffered significantly more damage, was unsalvageable.

While everything in the gallery was destroyed, there was one plastic quilting tote that remained afloat in his home when he returned. It contained what Richard calls his 10-Year Quilt, a quilt he frequently brings with him when he’s on the road today. “It represents my healing process,” he said.

The storm ultimately led to Richard accepting a new opportunity that took him to a very different line of work. He began performing a variety of legal writing and permitting tasks for an oil and gas company. Similar positions kept Richard traveling for several years, until quilting knocked once again. This time, he accepted a position at a Fort Collins, Colorado sewing and vac shop. Here he began teaching classes and fell in love with sharing his quilting knowledge.

With his focus back on quilting, Richard entered a number of designs into AccuQuilt’s 2013 Quilt Block Design Contest. Several of these made the Top 100, igniting his relationship with AccuQuilt. “The educator position just kind of happened,” Richard recalls, and he’s grateful it did.

Many students at his AccuQuilt Educator Events around the country are drawn to him. “Most of them are very excited to see me,” Richard said.

The retailers that host the shows are usually fans of Richard’s as well. Not only because he draws in a crowd to his classes, but also because he has vast knowledge of sewing machines that allows him to answer a multitude of questions on the fly. Much of this knowledge comes from his experience as a salesman, a position in which he toured factories and received hands-on training from prominent manufacturers such as Bernina, Baby Lock and more.

Besides traveling, teaching and submitting quilts that travel with national shows, Richard puts his talents toward working with veteran-serving organizations, including Quilts of Valor and Wounded Warriors. With his father having served in World War II and having lost three cousins in Vietnam, he sees it as his way of “paying it forward.”

Doors have opened for men in quilting since Richard was a child, and he encourages men who are hesitant to overcome any negative societal pressures. “Everyone is an artist,” he said. “That fear is the biggest thing that can take away the desire.”

It all started for Greg Gaggini in the Windy City. Now the President of AccuQuilt, he actually spent time early in his career with a company that sold quilts, bedding and other domestic products. At that point, he didn’t understand the real value behind quilting, but he was more than happy to be involved in the business.

“I had a one-dimensional mindset,” Greg recalls. “I was focused on buying and selling.”

He maintained this mindset for more than a decade. At the end of this timeframe, he moved to Omaha, Nebraska (where AccuQuilt is headquartered today) and took on a role with a company that focused on selling products online and to retail stores.

At the end of his time with his first Omaha company, Greg started meeting regularly with AccuCut CEO Steve Nabity and ultimately agreed to join the AccuCut executive team.

Steve, now also the CEO of AccuQuilt, comes from a Mechanical Engineering background and admits that today he still carries that methodical mindset. He created the first AccuCut die-cutting machine after seeing his wife make cookies with an everyday rolling pin in 1990. He thought, if the rolling pin could cut out cookies, why couldn’t a similar roller cut paper? 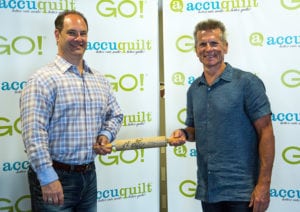 Once Steve and Greg joined forces to revolutionize the die-cutting industry, Greg remembers their first line of business was brainstorming opportunities that would help them “touch more lives.”

They decided to expand from cutting paper to cutting fabric as well – luckily for us all. Their first catalog, AccuCut Quilting, was released before they attended the 2007 Fall Quilt Market to showcase their new product in Houston, Texas.

Greg recalls “lines of quilters” who were intrigued by their new product, but there was a crucial detail that Greg and Steve learned very quickly – this machine wasn’t optimized for quilters, and the quilters let them know it. They were overwhelmed with comments stating why their machine wouldn’t be useful.

“There’s no seam allowance. How am I supposed to quilt with this?”

“This isn’t practical for a quilter.”

Steve still clearly recalls some of the conversations he had with disappointed quilters at the show. “We didn’t know all of the answers,” Steve said of the revelation at the show, “but we knew we needed to know them very quickly.”

They knew when creating the product that there was more math and engineering to cutting fabric than cutting paper. However, to implement these necessary changes (and other future developments), Steve knew they had to bring on knowledgeable people and “stay out of their way.” They needed quilters with the drive to improve their craft.

“A lot of people in this industry have a product,” Steve said. “We want to be sure our product makes a difference or solves a problem.”

With the cutting machine refined by quilters, Steve brought it to a group of product evaluators in 2008. The response was not at all what he expected – no one liked it. Both consumers and industry professionals told him it wasn’t a viable product, so why did he continue to pursue it?

“Being called stupid is part of entrepreneurship,” he said. “Opportunities will come in front of you, and it’s up to you to decide whether it is an opportunity or a problem.”

If you couldn’t guess, he chose opportunity, and it seems like he chose correctly.

Despite his 20-year-old self thinking you’d be nuts to say he was in the quilting industry, Greg is glad to be where he is with AccuQuilt. “It took an educational change for me to truly embrace it,” he said. “When you see the quilters’ faces, when you hear their stories, when you see the tears of joy rolling down their cheeks, you get it.”

“The warm thing about our industry is that a quilt can make a difference in someone’s life,” Steve said. “Every single quilt has a story.”