AccuQuilt and the Omaha Modern Quilt Guild teamed up earlier this summer to collect donated quilts for people in Pilger, Nebraska, whose town was virtually destroyed by twin tornadoes in June. Now, as the OMQG completes the quilt drive, they are hoping the quilts bring comfort to those whose lives were changed in a matter of moments.

The OMQG, spearheaded by its director, Lori Bain, took on the effort because of seeing news stories about the devastation. They wanted to do something to support the victims and to show them that people care about what happened to their community.

Although many quilt shops and guilds were enlisted to collect quilts for the cause, the OMQG realized they needed a larger central holding facility for the quilts to make the logistics of the deployment as efficient as possible and to protect the quilts. AccuQuilt welcomed the opportunity to contribute to the worthy cause.

“We are honored to be a part of this great cause and appreciate the team effort it took to make this quilt drive happen,” said Steve Nabity, AccuQuilt’s Chief Energizing Officer.

In addition to serving as the central holding facility for the quilt drive, AccuQuilt also opened up its Dream Studio for volunteers to conduct sew-ins in their state-of-the-art studio. The Dream Studio is fully equipped with fabric cutters, sewing machines, embroidery machines, a longarm machine, and much more. The sew-ins provided camaraderie and allowed quilters to create beautiful projects with a great support system and plenty of inspiration at their fingertips.

After collecting over 500 quilts, some of which were made by volunteers during the sew-ins, Bain is still overwhelmed by the generosity of so many people. 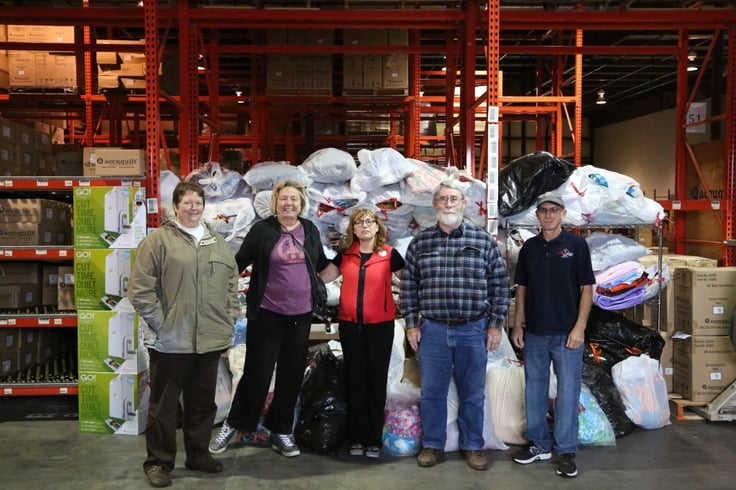 The OMQG received a lot of support for the quilt drive from other local quilt guilds, including the Lincoln Quilters Guild who made over 30 quilts and donated many more. Bain is thankful to everyone for the team effort.

Last Friday, Bain and her team arrived at AccuQuilt to pick up the heartwarming amount of quilts. Her team, along with AccuQuilt employees, created an assembly line in order to load the quilts onto the van much faster. While loading, there were a lot of “oohs” and “ahs” as everyone caught glimpses of the beautiful work. 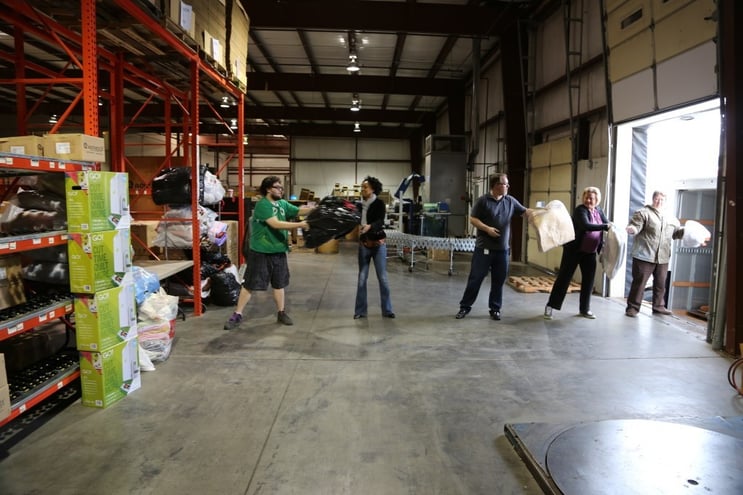 The OMQG and AccuQuilt employees create an assembly line and load the quilts.

In Pilger, Bain and the other volunteers teamed up with Omaha’s Rejoice! Lutheran Church who they learned would be in the community providing services like painting, cleanup, and a spaghetti dinner for the residents. They met at the Pilger Swimming Pool Hall, one of the few buildings that survived the tornadoes, with an assortment of quilts to distribute to those affected by the storms. It was a prime opportunity to distribute the quilts since many residents were there for the spaghetti dinner. 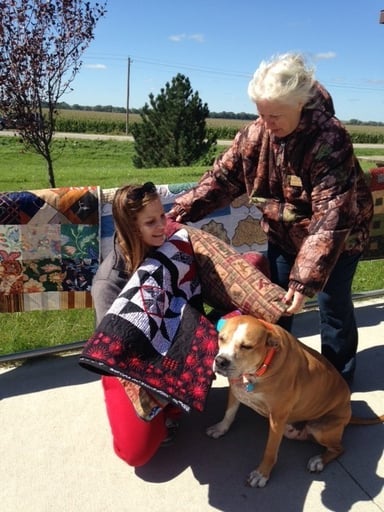 Shirley Spence of the Nebraska State Quilt Guild gives a quilt to Kristen and her dog George.

Approximately 350 quilts were distributed to Pilger storm victims. The remaining quilts will be distributed during the quilt deployment to Beaver Crossing in October. It will be a long time before Pilger and the surrounding areas recover from the destruction caused by the tornadoes, but hopefully the quilts will provide some level of comfort to them as they continue to rebuild their communities. And when they feel the warmth from their new quilt, they will feel the love that went into making it and know that many people are still thinking about them.

To learn more about the Omaha Modern Quilt Guild, visit omqg.blogspot.com. To schedule a tour of the AccuQuilt headquarters and Dream Studio, please call 888.258.7913, or email at tours@accuquilt.com.