I've been thinking for quite sometime about making a quilt for my sister using vintage postcards from all the countries we have visited. I've been collecting the cards for years, and now thanks to Melody Littrell, I am totally inspired and on my way. Here is her story.

I met Melody when she presented her National Parks quilt at a state "Quilter's Day Out." Completed in 2014, it was a 40th anniversary gift for her husband. 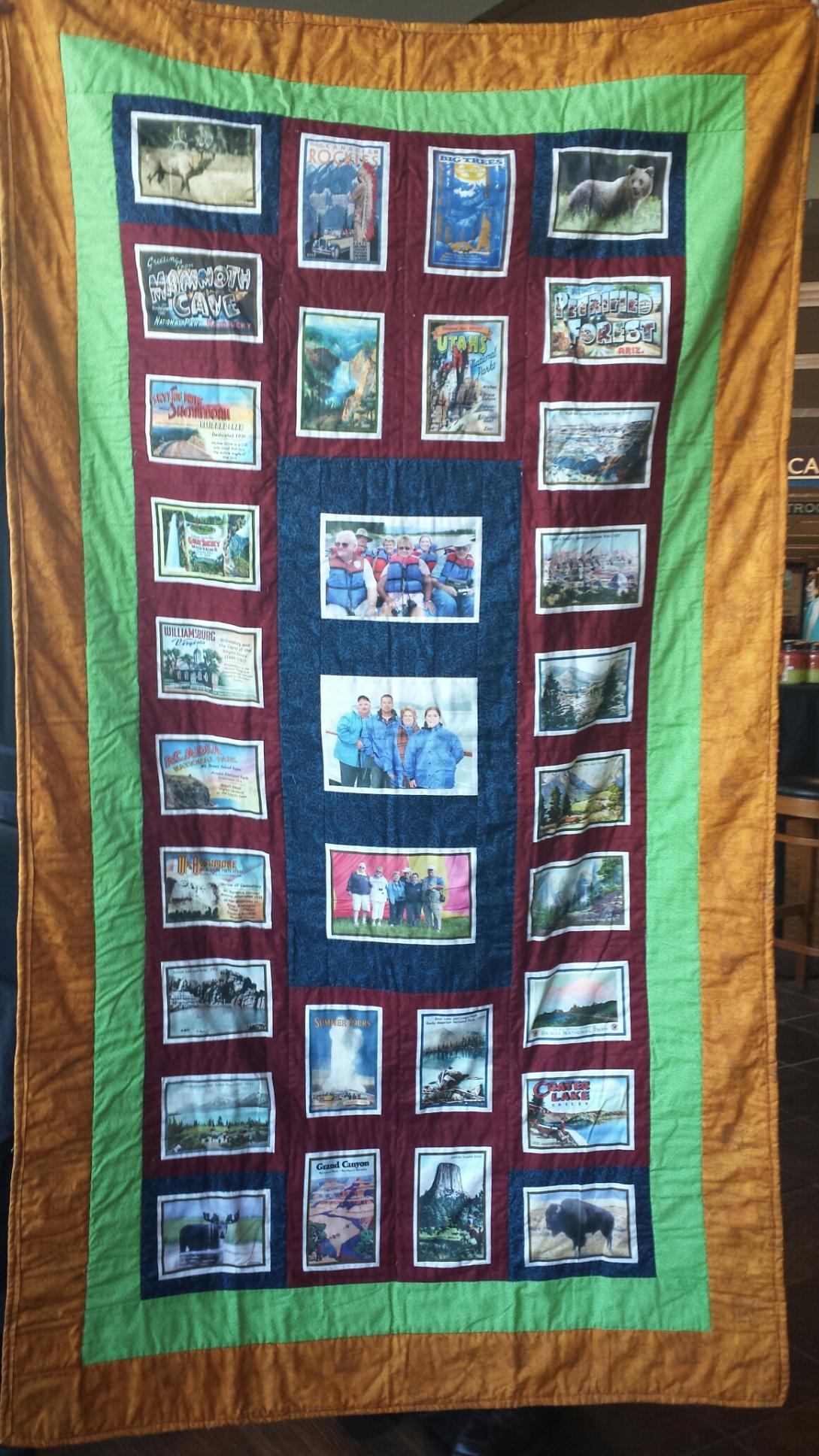 Even though she grew up watching her mother quilt, she had never taken the time or had the interest to learn. Melody asked for a sewing machine for Christmas, after marrying her husband Philip in 1974. Although she was excited to get the machine, she was intimidated by all the buttons.

Meanwhile, Philip expressed his interest in traveling and not having seen much of the US, they both began a mission together. It was a mission to see our country's National Parks.

Their first big trip was in 1976. They loaded up the wagon and headed West. After visiting five National Parks they were "hooked."  They visited Badlands, The Painted Desert, The Grand Canyon, King's Canyon, Sequoia and Yosemite. That's a lot of ground to cover in one vacation!  "Oh, and we visited the Petrified Forest Meteor Crater...I'm not sure if that's a National Park," she said. 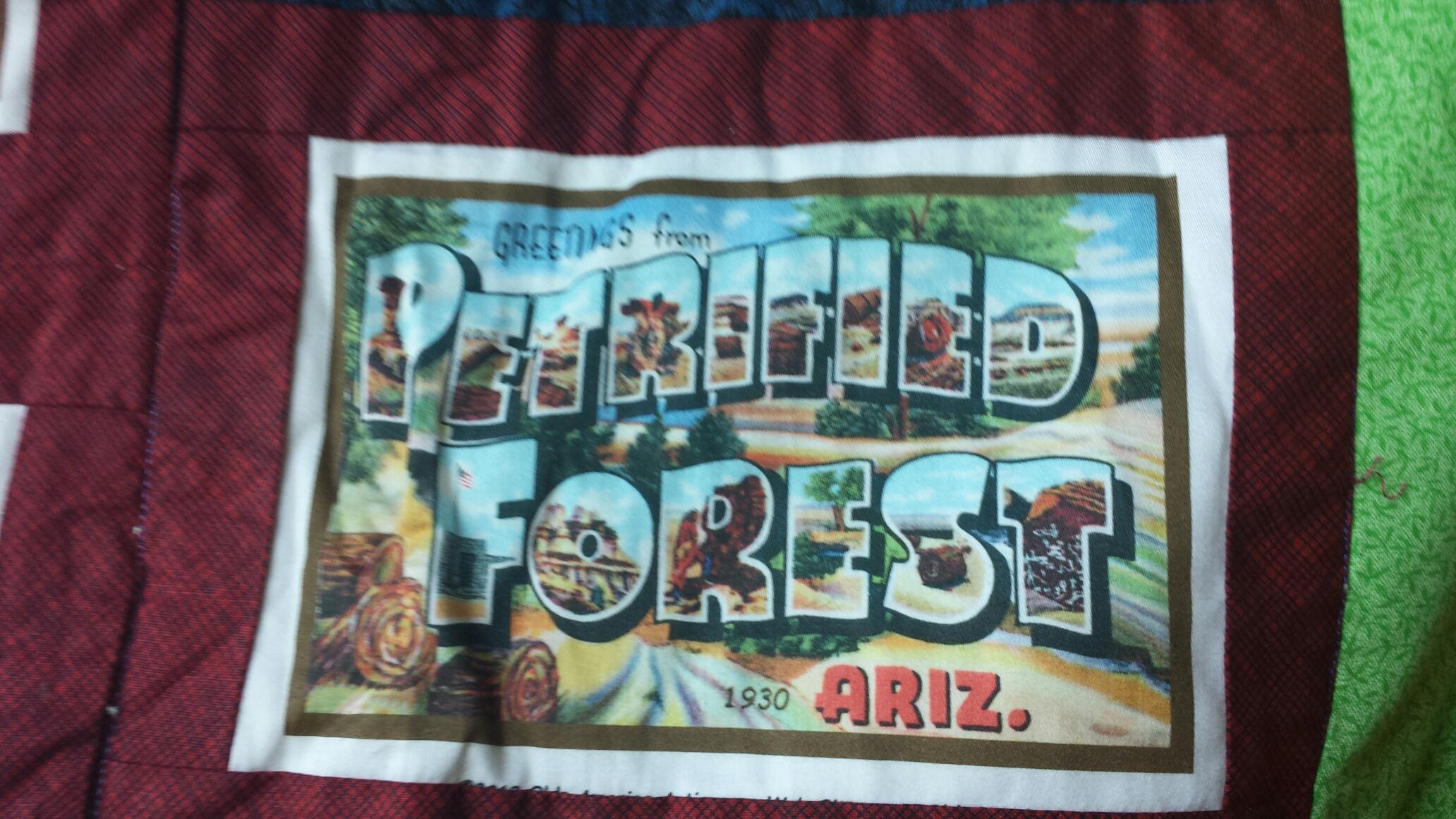 "I don't think it is," I replied.  I remembered when I visited the crater after The Grand Canyon and thought the canyon was a much bigger hole in the ground and much more worthy of National Park status and recognition.

The trip to The Smokies was in 1980. At this point, I asked if she had started collecting old postcards with their very first National Park visits. I thought that Melody had collected these cards during every trip and then was photo transferring them onto cotton fabric to make the quilt.

"Oh no," she replied.  "I spied them in the very first gift shop and then realized that every park shop sold their postcards on fabric. I had begun sewing on my new machine, making simple quilts composed of blocks that I would cut. I thought to myself, this would be easy and fun, to continue collecting these national park blocks and someday sew them all together."

In 1983 with a 3-year-old son and a daughter 8 weeks old, Melody and Philip drove to Acadia National Park in Maine. 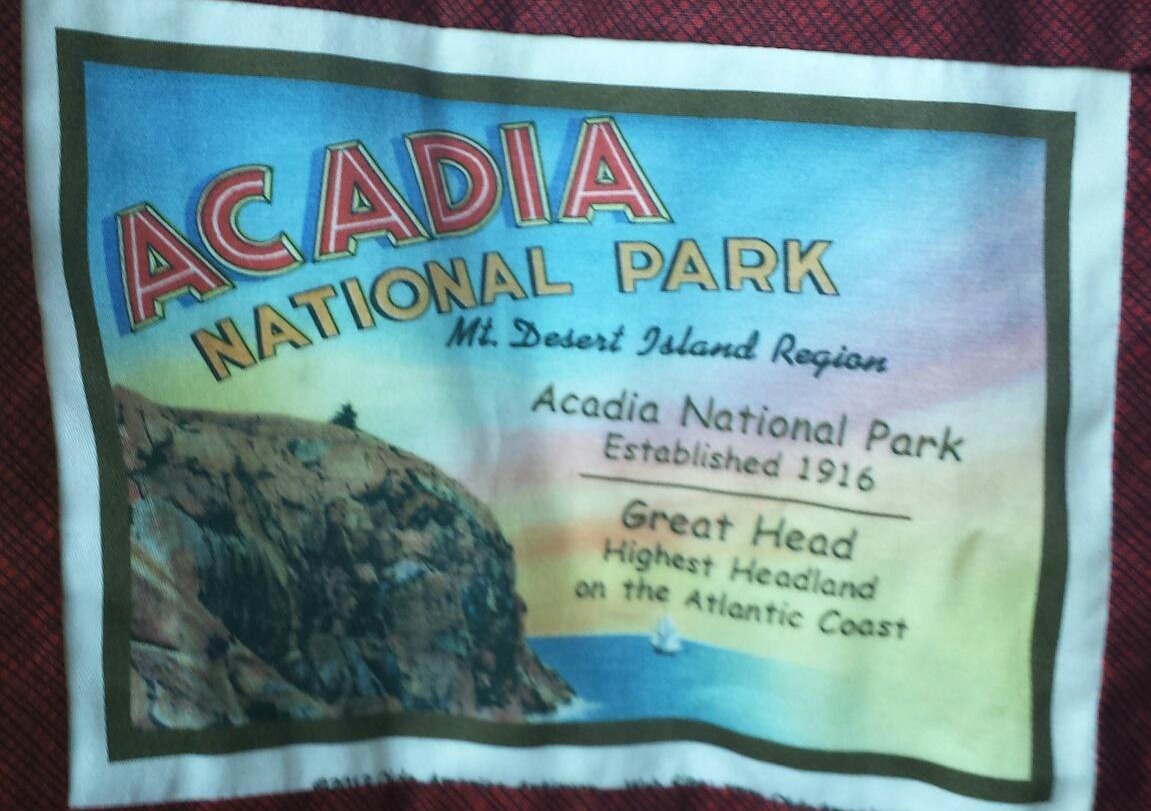 In 1991, with the children at ages 8 and 11, it was time to invest in a "pop-up" camper. "That was the year of a really big trip," Melody told me. They drove to Yosemite and Yellowstone, Crater Lake and Seattle. It took almost 400 gallons of gas to travel 6,919 miles with that camper in tow. 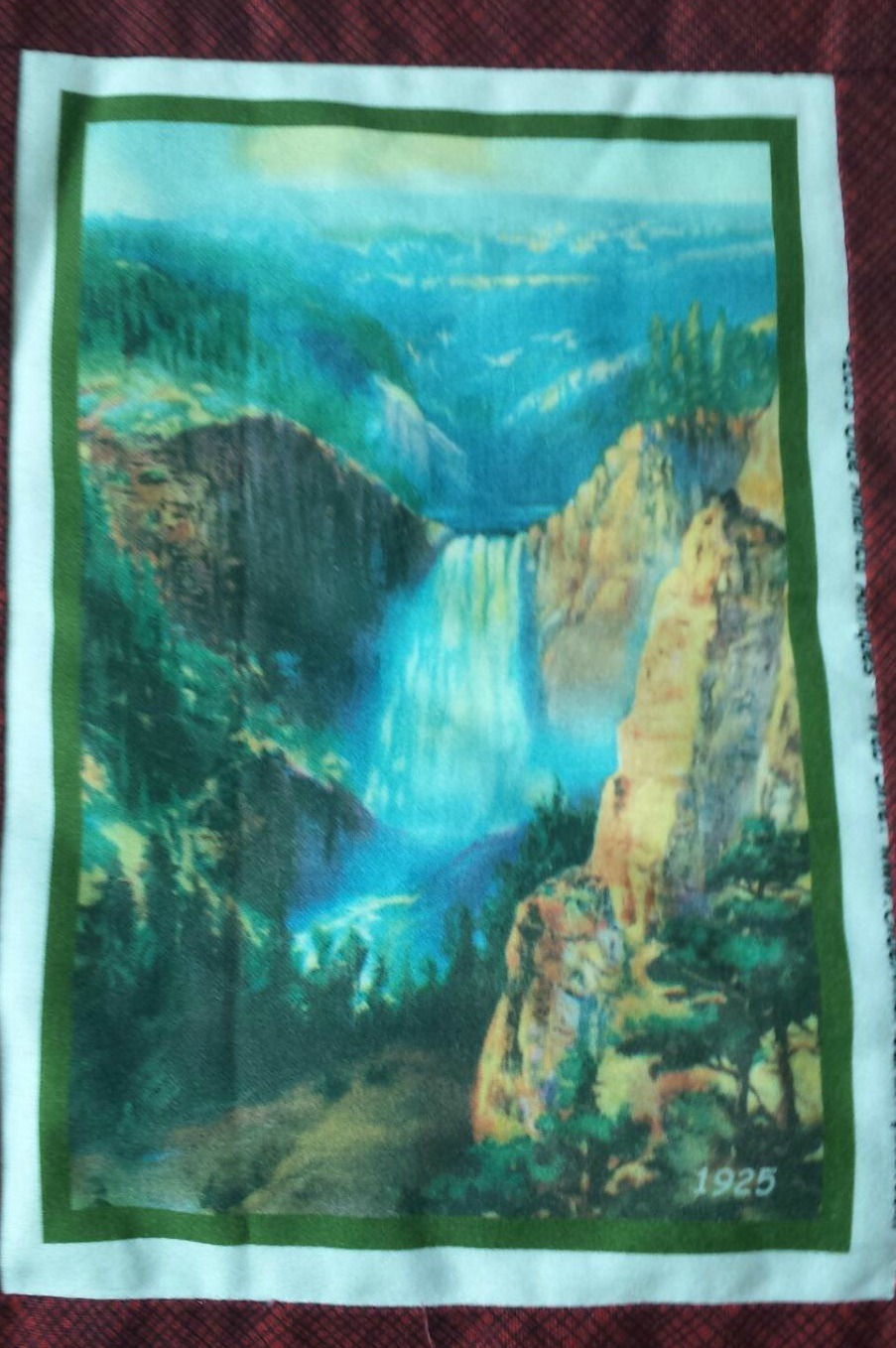 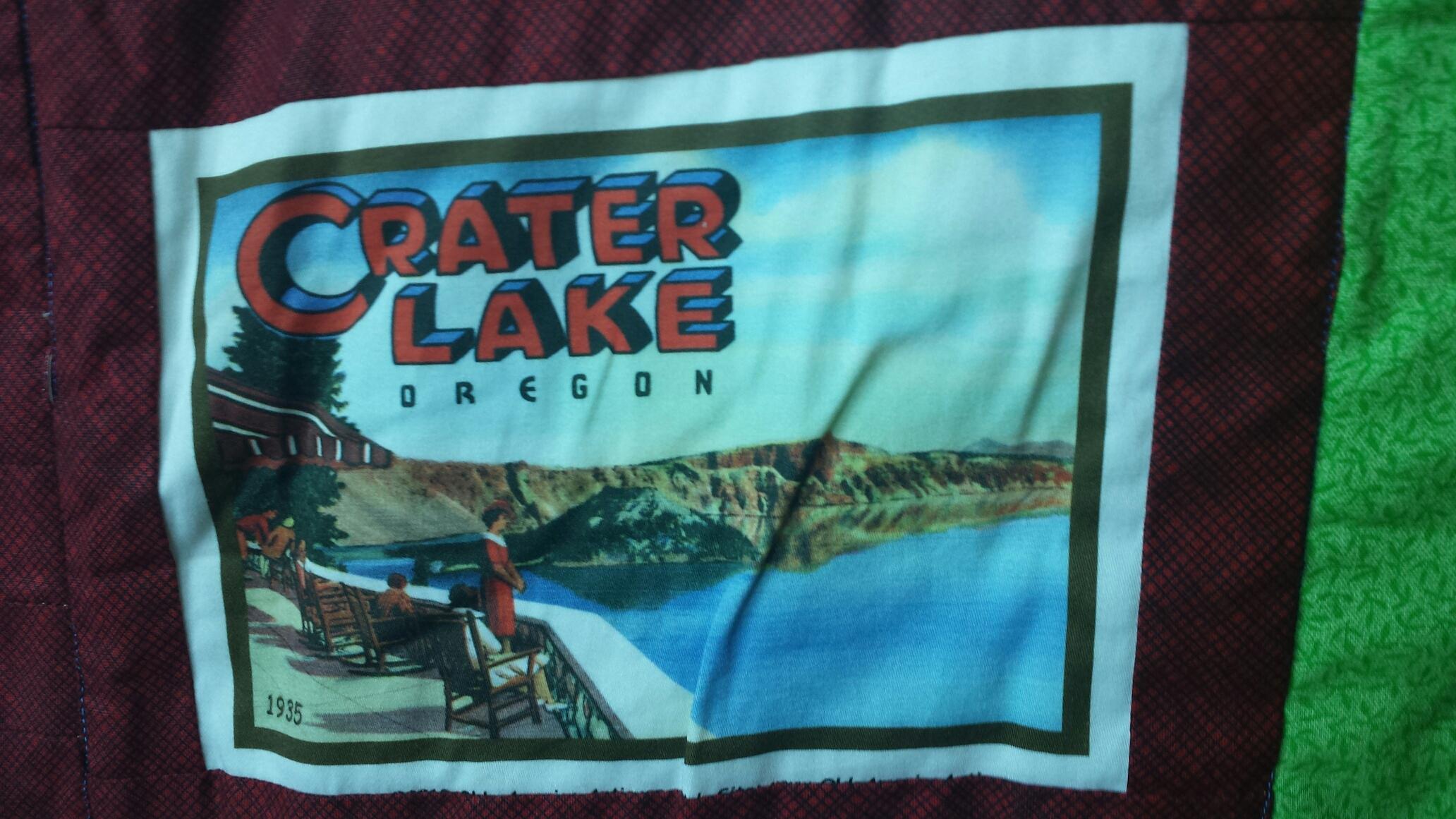 "It was such a memorable year, the parks were so beautiful,"  she told me. "And, it was The Year of The Deer. Phillip tried to avoid hitting a deer that darted across the road and the deer darted between the car and the  camper, kicking a hole in the front of the camper. "That hole is still there," she told me with a funny smile.

There was a broad gap in time before the next trip.   Meanwhile, several block quilts were put together and children were raised.

The Littrell's took a cruise to Alaska on Holland America in 2002 ... a post graduation trip for the kids. "There's a photograph in the quilt where we are all wearing blue raincoats at Mendenhall Glacier. It wasn't a National Park, but the wonderful memories made it worthy of prime quilt placement," Melody told me. 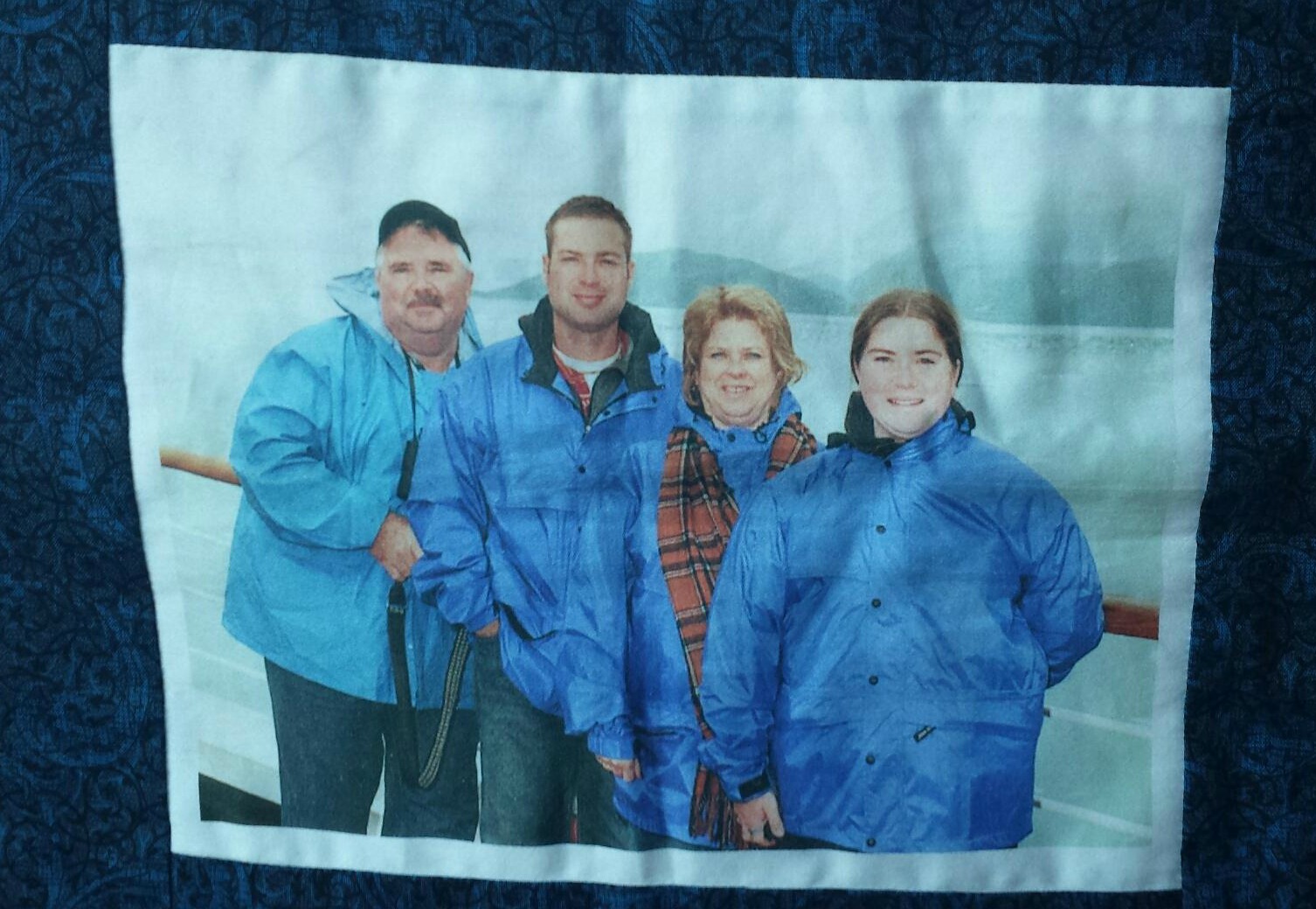 Another "BIG TRIP" was in 2006. This was the year the whole family joined in. Melody's sister and her sister's boyfriend, the kids (Michael and April) and Philip's dad, all went along. It was back to Yellowstone, a fun raft ride down the Snake River in Jackson Hole, a visit to The Badlands, then a memorable hot air balloon ride in The Tetons, Mt Rushmore, Devil's Tower, Little Big Horn (National Battle Ground), Glacier National Park and a drive through The Rocky Mountains!

This trip covered over 5,000 miles, leaving the family with many beautiful and priceless memories. "Philip's father passed away two weeks after our return," Melody told me, reminding me how very important memories are.

A visit to Shenandoah National park came in 2007.

Then a trip to Oklahoma, Arizona, Arches National Park in Utah, Garden of the Gods, Pikes Peak, and Estes Park in 2008.

"I never realized what it meant when someone would tell me about altitude and the air being thin until I went to the top of Pikes Peak," she said. "Did you know there's a place there that is actually an "oxygen" bar?

Then she said, "There was an old man standing awfully close to me, he had an oxygen tank and for a split second, I thought about taking it away from him, just to catch my breath!" 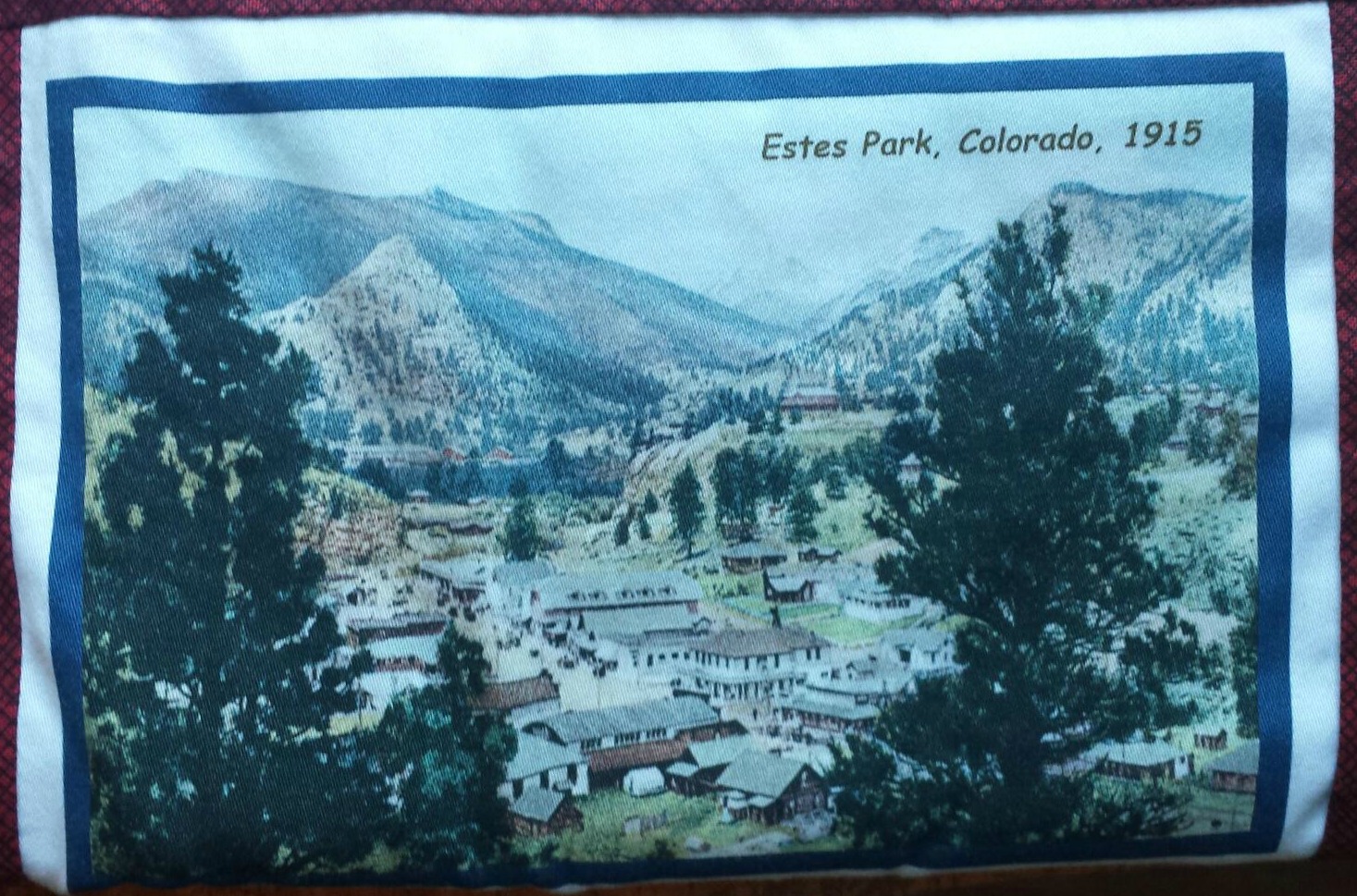 In 2011, the Littrell's drove to Southwest Canada, through the Canadian Rockies. "They didn't have the postcard fabric at that park, but it's available now, five years later," she said. From there they traveled to Banff, Jasper, Waterton Peace Park, and Glacier International.

Last year, they took a trip to Nova Scotia. "Our intention was to look for lighthouses," she said. "On the way back down, we found a beautiful park in Milford, PA called Dingman's Falls, followed by another in Shenandoah, Virginia."

Melody's National Park quilt is 42"w x 64"h and it is made from cut blocks and the collected 4"x 6" antique postcard reproductions on high quality cotton sateen. The corner blocks are bear, elk, moose, and buffalo (all seen on various vacation trips.) This is only the 5th block quilt (and 5th quilt) she has made to date and now she's ready to experiment with more complex patterns. 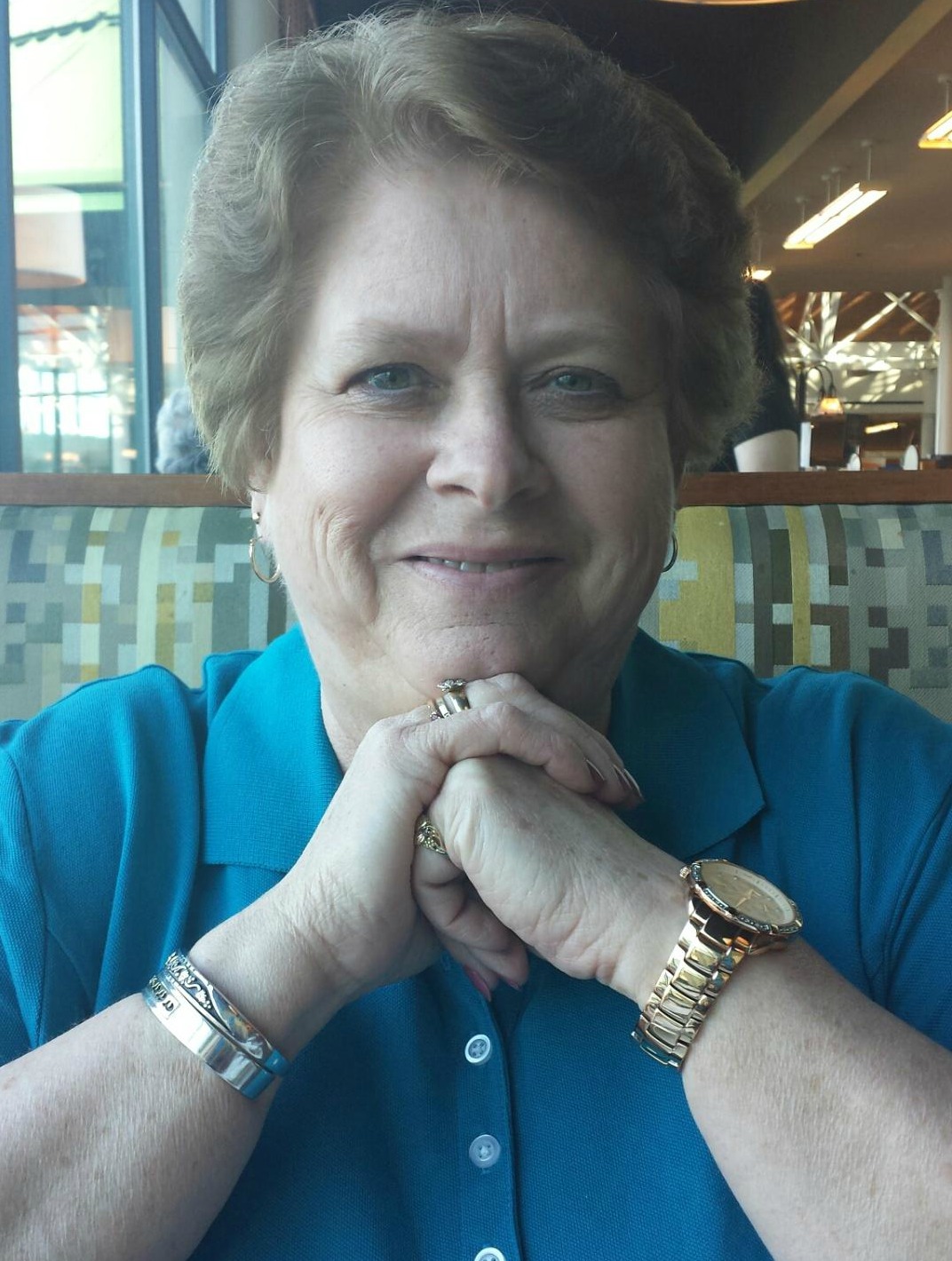 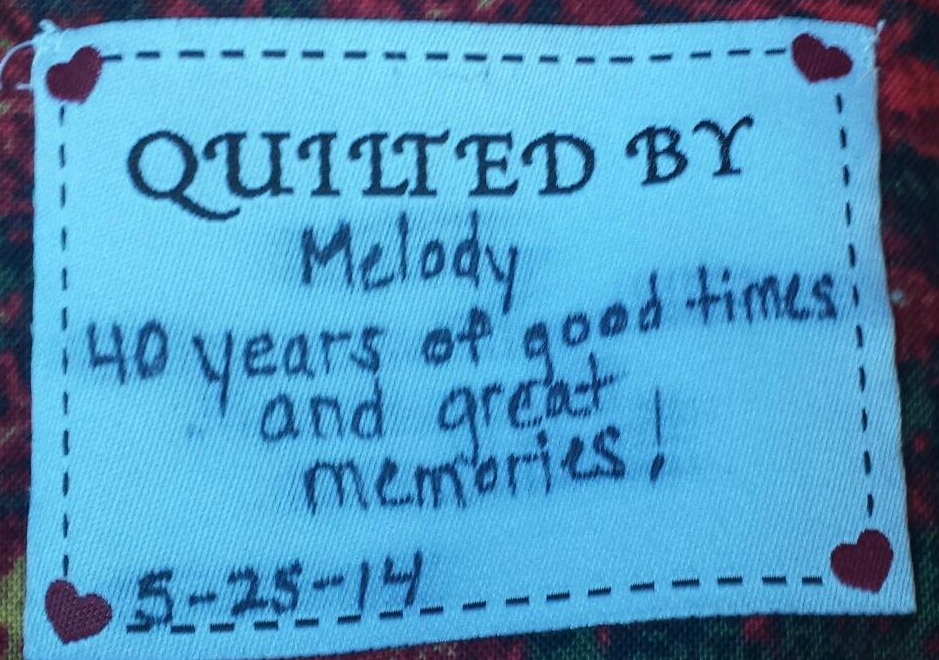 When I asked if they were planning to travel to more National  Parks in the East, the response I got is one I will always remember: "We'll probably travel the east coast to see lighthouses. I purchased tartan plaid fabric in Nova Scotia and plan to use it to make a lighthouse quilt next. I doubt we'll do very much other traveling in the East. Regarding National Parks, my husband says that when God created our continent, he started on the West coast and when he got to the East coast, he ran out of ideas!"

My answer to that was, "The great thing is, no matter where you go, there's plenty of inspiration for quilting everywhere!"

Note:  National Park fabrics are available online and as far as I know, still in the park gift shops across the U.S.

Mary Lee resides in Lexington, Kentucky. An artist in several mediums, she pursues folk art, painting, photography, jewelry making, quilt pattern design, and her favorite: quilting and collecting fabric. She has belonged to the same local quilting group for over 30 years and teaches classes in Kentucky and Tennessee. See her greeting card line at cardsbymarylee.com