Last Minute Deals: Get your gifts in time for the holidays!

Quilter and designer Connie Kresin Campbell is a self-professed homebody who has no desire to travel and is the most content when in her sewing room or at a quilt store. This talented quilter whose passion for free-motion quilting developed after seeing a demonstration many years ago, currently has several hundred quilting projects in her collection. Her husband, although incredibly supportive, wonders if some of her creations will ever reach another destination since Kresin Campbell has taken over their home in Iowa.

Kresin Campbell, 64, worked as an office manager at one point in her life, but she preferred the job of a stay-at-home mom. Being at home with her kids allowed her creativity to flourish, and it has continued on a steady pace for decades. When she’s not free-motion quilting, Kresin Campbell is reading, walking, or spending time with her husband on his boat.

You’re really cranking out a lot of projects. About how many quilts do you have at home right now?

I mostly do small projects. I don’t do many big quilts mainly because I don’t need anymore. I love the feeling you get when you finish something. I have about 50-60 big quilts and several hundred pillows, table runners, etc. I’ve quilted all my life, but I stopped for a while when I was working. I used to do craft shows about 16 years ago. I made table runners, wall hangings, and things like that. There was no way I was going to do plus-sized quilts because you couldn’t get your money’s worth out of them. And I really enjoyed that [craft shows] because making the same thing over and over again doesn’t bother me. But a lot of people only like to make something once. I don’t mind; that’s why I love the dies. Recently I’ve been using the GO! Kite die, and I use it for all kinds of different projects.

Based on some of your recent projects, I see you love the GO! Big Snail’s Trail die, too. You’re getting some good use out of it.

Yeah, I am. Sometimes I’ll have my neighbor come over and I’ll show her what you can do with it [fabric cutter] and then we cut out a lot of stuff. What I really like is the geometric shapes and half square triangles. Those are just awesome. Especially when you cut them correctly because, you know, people will say the sizes aren’t right. Well, they aren’t cutting it right. They aren’t putting the fabric in the right way so I try to tell people that. Originally, I first bought the fabric cutter for the appliqué dies, but now it’s more for the quilting shapes. I just love the accuracy and how fast I can crank them out.

I understand your mother taught you how to sew at a young age. When did you make your first quilt?

I started sewing as a teenager and sewed all my own clothes for school. My first quilt I ever made was when I was about 18 or 19 years old and of course it wasn’t made right, but I didn’t know. It was just squares that I sewed together, and I put an old blanket in the middle and I tied it with yarn to hold it all together and it worked!

How did you get into free-motion quilting?

It was about 25 years ago when we moved out to California for a short time. I ended up going to a quilt store and the demonstrator was doing free-motion quilting. I had never seen it before. I just thought it was the neatest thing. I bought a darning foot that would work on my machine, and it’s actually the same darning foot that I still use. I just kept practicing and taught myself how to do it. It took a while because it is frustrating when you’re first trying to learn. That [free-motion quilting] was one of the neat things that I was doing at craft shows because at that time I don’t think anyone had ever seen it. They thought I was doing a stitch by hand, but I told them it wasn’t hand quilted. It was still new, but now everybody does it. But I still love it. I can do it in my sleep. And I still use my 1951 Singer sewing machine.

So, is hand quilting out of the question?

Yeah, I don’t hand quilt. I don’t even put my binding on by hand anymore. I did one quilt, an Eleanor Burns Log Cabin Quilt in a Day, which is one of the first quilting books I ever bought. I made it years and years ago and I pieced it probably in one day but it took me a year to hand quilt it and it’s the only one that I’m ever going to do. I just have too many ideas in my head . . . too many other things I want to work on.

Do you sell your creations, or do you keep most of them?

No, I don’t sell anymore. And my husband keeps saying, ‘What are you doing?’ I think he would like me to. But I am starting to design patterns, and I like doing that.

When did you start designing patterns?

About two years ago. And I’ve been working with Island Batik for about a year. I’m an ambassador for them and they started carrying some of my patterns.

What quilting tool can you not live without?

You know, actually it’s my rotary cutter and mat board. I would have to say that mainly because when I first started quilting it didn’t exist. When I first started quilting, when I cut out squares it was cutting a piece of cardboard into a square, marking around it with a pencil, and cutting it out with scissors. I sound really old, don’t I? [laughter] But that is the way I first did it. So, to me, when the rotary cutters came out it was the greatest tool there was and then of course next to that would have to be the AccuQuilt fabric cutters.

What are you doing when you’re not quilting?

I like to work outside in my flower bed or I read. When I’m sewing and I need a break, I’ll go out and sit and read a book for a while. My dad lives with us, so I’m always going to the library getting new books because he reads like crazy and so then I’ll get myself a couple because I like sci-fi. Otherwise, since we live here on the river we’ll do stuff with neighbors or go out on my husband’s boat and go fishing. And I like to walk. I’ll go out and walk around our small town just to get a little fresh air and a little motion because when you quilt you don’t move around very much.

What would people be surprised to know about you?

I really am a loner. When people meet me with my husband they think she’s fun, the life of the party or whatever, and I’m really not. I’m an extroverted introvert. I’d say my husband gets really invigorated and happiest when he’s around people. He’s a people person, and I’m not.

What advice would you give to a beginner quilter?

Start with a small project and don’t get frustrated. When I was learning to do the free-motion quilting I read a lot of things on the Internet. People were saying they tried it and it jammed up their machine so they can’t do it. When I see that I tell them to try it again because oftentimes with free-motion quilting it’s not you, it’s your machine. You have to get a proper tension on your sewing machine. My sister does not quilt. She’s 18 years younger than I am, and she decided about a year or so ago that she wanted to do a little bit of quilting and so I showed her how to do free-motion quilting. It was a piece of cake for her because my machine was set up for her to use. Also, nobody had told her it was hard to do.

What is the best advice you’ve ever received?

To believe in yourself and have confidence that you can do something.

Name three of your favorite people.

My husband because whatever I do he’s just one hundred percent behind me. For quilting I’d have to say Eleanor Burns because she’s just awesome. I look at her patterns and know that’s what I want to do. Everything is spelled out for people. And I’d say my mom who’s no longer here. She taught me to love fabric and to love sewing. When I did the craft shows she did them with me. She gave me her love of fabric, color, and creation.

Connie Kresin Campbell lives with her husband in Muscatine, IA along the Mississippi River. See some of Connie's creations below and be sure to visit her blog, Freemotion by the River. 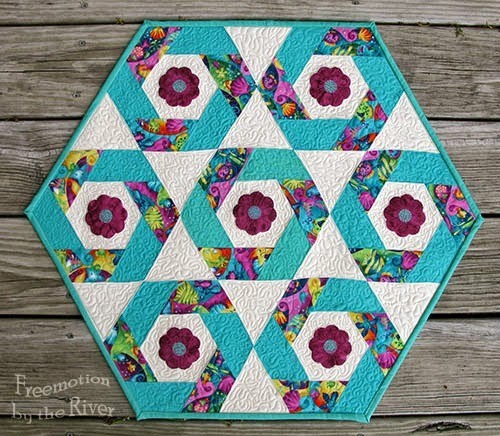 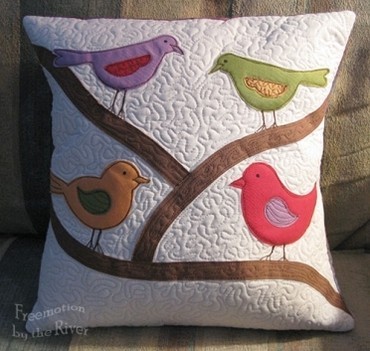 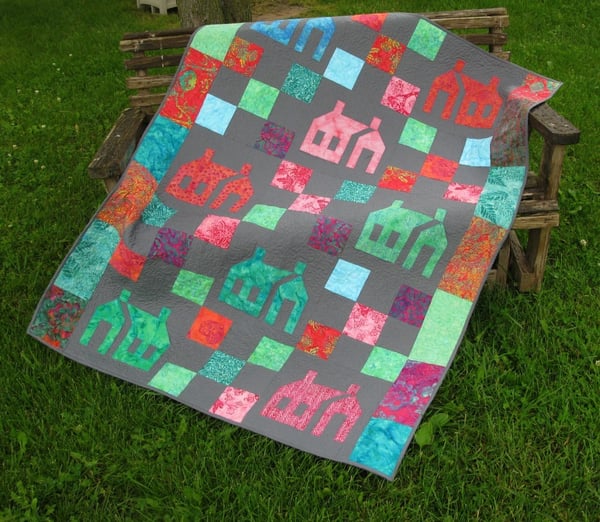 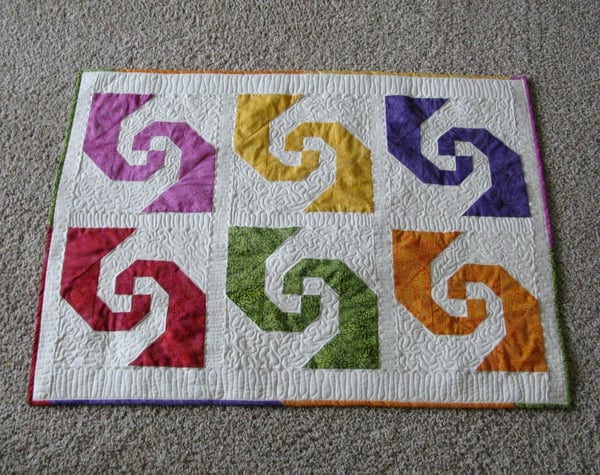 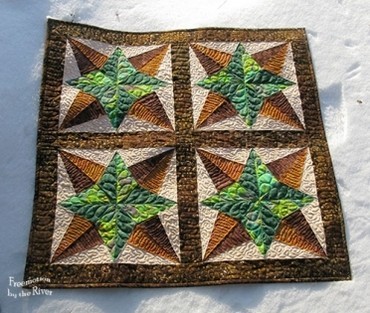 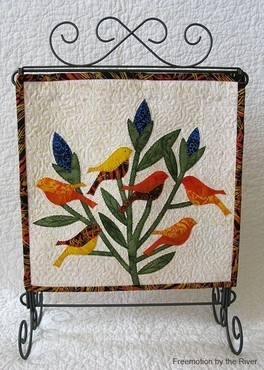 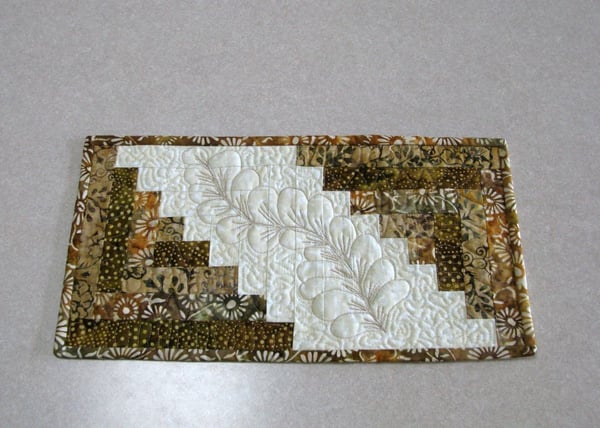