It’s not common that one goes from being a musician and composer to a renowned quilter, but that is indeed Ricky Tims’ story. Luckily, Ricky’s students won’t miss out on his musical talent, as he often incorporates music into the quilting events he does every year. People attending his events not only receive great quilting tips, but they get an entertainment experience that they will always remember. Music was the love of his life until the 1990s when he met his new love, quilting, which Ricky picked up just as easily as he did music.

I recently had the pleasure of getting to know Ricky on a more personal level and, I must say, along with his other talents, he is a fantastic storyteller.

Tell me more about your musical career.

I started music before I really even knew I existed on this planet. My parents put me into piano lessons at the age of three. So I essentially learned reading music before I understood A, B, C… Music always was the number one thing in my life up until there was a switchover from music to quilting in the mid-90s. I majored in music in college as a performance major in piano and also as a composition major. So I kind of had the best of both worlds as a musician. I could read music; I could play Bach, Beethoven. But I could also sit down and make something up on the spot and just play. I didn’t need music. If I knew what a song was, I could figure that out.

Ricky Tims is going on the road again for one of his quilting "concerts."

How did your career in quilting begin?

In 1991, my 83-year-old granny was remarried, and when she remarried she moved and she had an old sewing machine that she didn’t take to the new house she was living in so my mom asked me if I wanted it.  At first I didn’t want it, but then I realized it was attached to a really tender time in her life. She’d lost her only son when he was 17 years old, and that was a year and a half before I was born. So she and I were very attached, and I remember her using the sewing machine and it being important to her. I was just going to use it as furniture. But then I was spending just about every Friday and Saturday night out 2-stepping, and I thought well now I’ve got a sewing machine, so I can make my own shirt to wear dancing.

So I went to a fabric store and found a pattern and thought if I make this shirt I’m going to look like an idiot, so I decided not to make the shirt. As I was walking out of the store there was one little rack of quilt books, and one of the books was a sampler [book], and I figured that’s something I could make that no one would see. It would just be something to do on this sewing machine. Because my brain works as an artist, I saw quilting almost instantly as an artistic medium and that engaged me quite a bit. It wasn’t a slow start... I delved into it head first without even touching my toe in the water beforehand. I was off and running with quilting very quickly. That was in ‘91.

Eventually I met some people and joined quilt guilds and then discovered that there were quilt shops, quilt shows and I started participating. By ‘93-’94, I was already doing lectures. And I got my conducting job in ’93, so from ‘93-‘98 I had a full time job while quilting was still escalating. It was 1998 when I basically made the real switch. I resigned my conducting job and dove into the quilting net; it caught me and I’ve been into the quilting arena ever since. I still do music, but I don’t conduct anymore. The last concert I conducted was in St. Louis. I conducted an 85-voice community chorus accompanied by the St. Louis Symphony Orchestra.

Ricky showing he can handle any size piano including this nearly 60-year old miniature piano that he had restored.

How do you marry your two careers?

I have found a way to incorporate music into my quilting experience. I do musical events that I call concerts. It’s a combination of storytelling, comedy, inspirational speaking, and music. I do these at a lot of quilting events every year. People come not so much for a lecture or an educational experience, but they come for an entertainment experience as I throw in heavy doses of quilting, music, stories, and inspirational into one big package.

Any other quilters in your family?

Both of my grandmothers made quilts. My granny made utility quilts that didn’t really have any pattern or design to them. My other grandmother did make an occasional quilt with a pattern. But I really didn’t pay attention to any of that. It just kind of happened around me. So, I didn’t learn from anybody in the family.

When I started quilting my dad had just retired from being a truck driver. He was 65 at the time. And I bought him one of those stained glass starter kits thinking he might enjoy that in his retirement because he liked building things. I thought stained glass might be right down his alley. The week I was going to make that shirt but decided to make a quilt instead, I called home and asked my dad what he was doing and how the stained glass was going. He said he was working on another project, and when I asked him what he was doing he said making a quilt. So without him knowing I was making a quilt and without me knowing he was making a quilt, we basically started making a quilt the same week in the summer of 1991. My dad continued making quilts until about two years ago. But prior to that he pretty much quilted every day in his retirement.

That is the most heartwarming story. It sounds like something you both were meant to be doing.

Yeah, and we enjoyed doing it together.

How did you first learn about AccuQuilt fabric cutters?

You know, I’ll never forget my first experience with an AccuQuilt product. It was a Studio cutter. Alex Anderson and I were doing a road trip, and we show up to this one place where this lady was making a bunch of charity quilts. She knew we were coming, but the people working on the quilts did not know we were coming. She told us they were cutting with the Studio so we went over to see it, and I was just amazed. I just didn’t know something like that existed.

What inspired you to make such intricate dies like the GO! Bohemia and GO! Arabesque?

Those designs are typical of the designs that I create. They may not be exact duplicates from my quilts, but they are derivatives of designs that I’m known for, so the logical thing is to create designs that appear to be in the Ricky Tims vocabulary, so to speak, and people can emulate those in their quilts.

What’s your favorite part of the quilting process?

That’s just not a fair question [laughter]. It’s easier for me to say what I don’t like than what I do like because I really do like everything from the design process to the finished process. A lot of it is improvisational, and it changes along the way. So for me, it’s the whole ball of wax unfolding. I don’t fully know the colors I’m going to use because as I continue to work all kinds of changes come into play. I didn’t use to like putting binding on because it took forever, and I used to hate marking but now I have a way of marking a quilt now that’s absolutely great. So, the things I didn’t like I found a way to do them differently and I actually love them now.

Name a quilting accessory you can’t live without?

Well there are three. I can’t live without freezer paper, water-soluble thread, and Ricky Tims’ Stable Stuff Poly, a non-woven tear away stabilizer. It does not dissolve and it’s really soft in a quilt. Those three products are the things that if I were on a desert island I would not be quilting unless I have them.

Why is the freezer paper so significant?

It is one of the best quilting tools there is, and I know a lot of quilters who use it. I use it for designing but basically when you cut out a template with freezer paper, you can iron it onto your fabric and it stays put, so you can accurately cut out your template and then it just peels right off. And then you can re-iron it to another piece of fabric and keep reusing it. It’s a great multi-purpose item. I keep boxes of it. In fact, in the early 90s Reynolds was going to stop making freezer paper and putting it on the shelves in grocery stores. Quilters were so upset about it that there was a huge write in campaign explaining why we needed it. The campaign was so successful that not only is it still on the shelves today, but on the inside lid of the box are quilting tips!

Talk about making a change!

It’s also not readily available in other countries, so when quilters around the world come to the U.S. they aren’t only going to quilt shops, but they’re going to grocery stores to get a couple of boxes of freezer paper.

What part of teaching gives you the most satisfaction?

I love teaching and I love sharing my experience and deconstructing techniques to the point where everybody can do them. I enjoy seeing the light bulbs go off with students and seeing their finished projects.

What’s next for Ricky Tims?

I suppose I’m in the latter chapters of my career. But I have a new website letsquilttogether.com, so I can have a stockpile of lessons and videos that can still be effective when I’m gone. There are only two classes right now, but a third one is coming as well as a 52-week photography class, which won’t be available until 2016.

If you’re not somewhere creating music or doing something quilting related, what are you doing?

Photography is my third discipline. That’s why I have that photography class. It’s huge for me. It allows me to be creative anywhere. But my relaxation is to go out to our 40-acre ranch in the mountains where we have a little cabin and a tipi and just chill.

Where are your favorite places to travel?

I have truly traveled the world because of quilting. I’ve enjoyed learning cultures and customs and meeting people all over the world. The blessing for me is I’ve had fabulous experiences with quilting all over the world. The best answer is I love being home because it’s where I get to find my own creative voice . . . where I get to do my creativity. And, even though I’ve traveled the world and gone to exotic places, it’s also great to be home.

I don’t expect to have any retirement. It looks like what I’m doing now . . . enjoying my life and having fun. 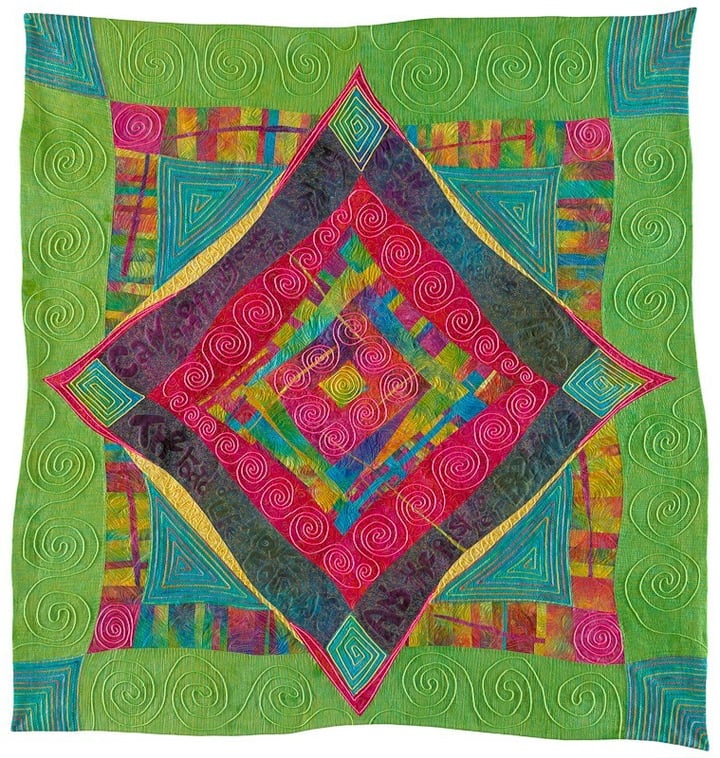 "Lifelines III: Can Something Come from Nothing?" (2012) This design won 1st prize at International Quilt Festival in Houston.