From a life of nursing to a life of sewing seams, quilter and artist Kris Khan moved from Atlanta to Omaha over a year ago, and she hit the studio lottery of sorts in the historical Hot Shops Art Center building near the downtown area. Her loft studio is surprisingly huge, and one can easily imagine her creative mojo overflowing on a daily basis thanks to her newfound environment.

After receiving a master’s degree in nursing and later teaching nursing at Georgia State University, Khan soon welcomed not one, not two, but three babies. As if raising triplets and working part-time as a nurse wasn’t enough, Khan still needed something else to do at home, so she looked for sewing projects. Khan already knew her way around a sewing machine, as she received her first one at the age of 14.

“Even though I’ve changed sewing machines over the years, I use it every day. If I can’t sew I get kind of twitchy and not very nice to be around. It’s like a release. Give me a seam to sew! Then I can cope with the world,” Khan says.

Of all things she could make, Khan decided on window treatments since they are quite lucrative. She made them for her own home and when people complimented her on them she realized it was a great way to make money while also being at home with her kids.

“I thought wow, it’s just design, I don’t have to fit anybody’s windows … it’s just whatever I want to do with color and fabric,” Khan remembers.

With her arm in a cast after having surgery on her elbow, Khan couldn’t continue wrestling the huge amount of fabric required for drapes, but she knew she had to make something, so she began sewing quilt blocks. Knowing nothing about quilting but realizing it involved making little blocks, she went to her local quilt shop and got a beginner’s book to help her. She pulled out some fabrics and started sewing with one hand while her casted arm rested on the fabric. She sewed one block, then eventually 144 blocks. This seemingly innocent stroll into the quilting arena led Khan on a path to making her first quilt: a queen-sized pinwheels. From that experience, Khan learned that quilting something so large on her sewing machine wasn’t the best idea.

“I quickly realized the appeal of twin-sized quilts, baby quilts … I still make big quilts, but I have now declared I will no longer quilt large quilts on my home sewing machine. I’m just going to send them to somebody. Life’s too short.”

Once her children were in middle school, Khan started working full-time at The Centers for Disease Control and Prevention (CDC). During the fall of 2009, while still working at the CDC, Khan went on a weeklong retreat at Nancy Crow’s—the mother of the art quilt movement—and that encounter is what took her quiltmaking career to another level.

“The experience permanently changed my approach to my work in many, many ways.  Nancy can be a stern taskmaster, but it definitely comes from a place of wanting to push you to do your best work not from being grouchy. If she had not pushed I would have never let go of the analytical, OCD side of my brain and found my inner artist.  She is a warm and caring person and her Timber Frame Barn is a magical space for creativity.  You work hard all day and a bell rings when it’s time to eat wonderful food, then you work some more,” says Khan.

“She had all these little mottos around the barn, and the one I remember the most is, ‘Don’t kid yourself.’ You know, if you put a lot of work into something, you really want it to go forward, but sometimes it’s just crap,” Khan adds.

Gaining more inspiration from Crow’s book, Nancy Crow, (2006, Breckling Press), the lessons Khan learned in her workshop were reinforced: Begin with the design and figure out how to make it later; work intuitively and trust the process; line and color are everything.

Although she still considers herself a newcomer when it comes to art quilts, Khan believes there are slight differences between an art quilter and a traditional quilter. She says the line is a bit fuzzy, but it probably comes down to what drives an individual’s passion.

These days, Khan is enamored by the Studio Fabric Cutter, which she borrowed for a project because she needed to cut out a lot of circles that would have been difficult to do by hand. Khan was commissioned by architect Eddy Santamaria who had designed a variety of doorways for She.la, an upscale women's retail store.

“He wanted to create a tapestry with gray industrial felt with circles cut in it and raised seams with orange thread. He wasn’t able to find any commercial workrooms that knew what he was talking about, so he came to me, and I was able to translate his vision pretty easily. I knew I was going to have to cut a whole lot of circles, and I had just heard about AccuQuilt cutters at the Omaha Modern Quilt Guild,” Khan recalls.

The doorways turned out amazing and everyone was happy to see the finished project. Khan says she couldn’t have done it without the Studio cutter.

Khan’s experience with another client a couple of years ago was a little different. The client wanted a quilt that consisted of photographs of her daughter printed on the fabric. The photographs would span across her life from birth to the age of 25. Khan thought it sounded boring and suggested making a tree of life with her daughter’s baby pictures at the bottom, and as she grew up the photos would be spread out all over the quilt. It was like a 5-foot tall applique tree.

“Leaves and pictures of the daughter were worked into the design, and she wanted crosses because they’re a very Christian family, so there’s like 100 hundred crosses just sort of hidden appliqued into the leaves. I wanted to kill myself,” Khan laughs.

“It probably took four months to complete. So I think the message here is just give the customer what they want. I didn’t feel good about it, so I had to make it into this art piece. I totally did it to myself. But it was very nice and very well executed and it’s something I can be proud of now.“

In the end, the client loved it and even tried to give Khan extra money for her troubles although Khan told her it wasn’t necessary. Khan says by the end of the process she and the client were both exhausted, but she simply couldn’t allow herself to go along with the original idea.

“It is soul crushing to sew ugly fabric. You just can’t make yourself do it,” she says.

Still, Khan will always love the process of sewing and quilting. She says there is something about sewing a seam and the rhythm of the sewing machine that excites her. Khan sews about 40 hours per week, and as long as her machine sews a straight line and sews it fast, she’s happy. And she’s even happier if she has some of her favorite fabric to play with.

“I love Tula Pink’s prints, and anybody’s solids. I can never have enough purple, and I love the look of black in a quilt. I like super-saturated colors, like you find in batiks. I don't like cutesy or overly sweet fabrics; I'm tired of most florals. My tastes are always evolving,” Khan says.

One quilt that still holds a lot of sentiment for Khan is her first improvisationally pieced quilt that she made while camping on a beach. Her sewing machine was set up under a palm tree, and she improvisationally cut the pieces and sewed them together. When Khan returned home, she put it together into a quilt and quilted it.

“It still looks fresh and new to me. It was about five years ago, and I still really love it a lot,” beams Khan.

Now that Khan knows firsthand the creative options and flexibility the Studio Fabric Cutter offers, she’s thinking about other projects to make with it, such as creating quilts from aerial views of landscapes like the views of farms from airplanes that look like quilts. However, now that the agricultural land is no longer divided into rectangles to accommodate tractors and laid out in circles to accommodate the irrigation systems instead, Khan is happy knowing that she now has a tool that can help her with this idea. In fact, she’s more eager than ever to create such a quilt or maybe even a series of quilts.

When asked about her dreams for the future Khan says, “I’m living my dream quite honestly. This is as wonderful as it gets. I’m so blessed. I’m very grateful that I realize I’m living the dream because some people live their dream and don’t realize how great they have it.” 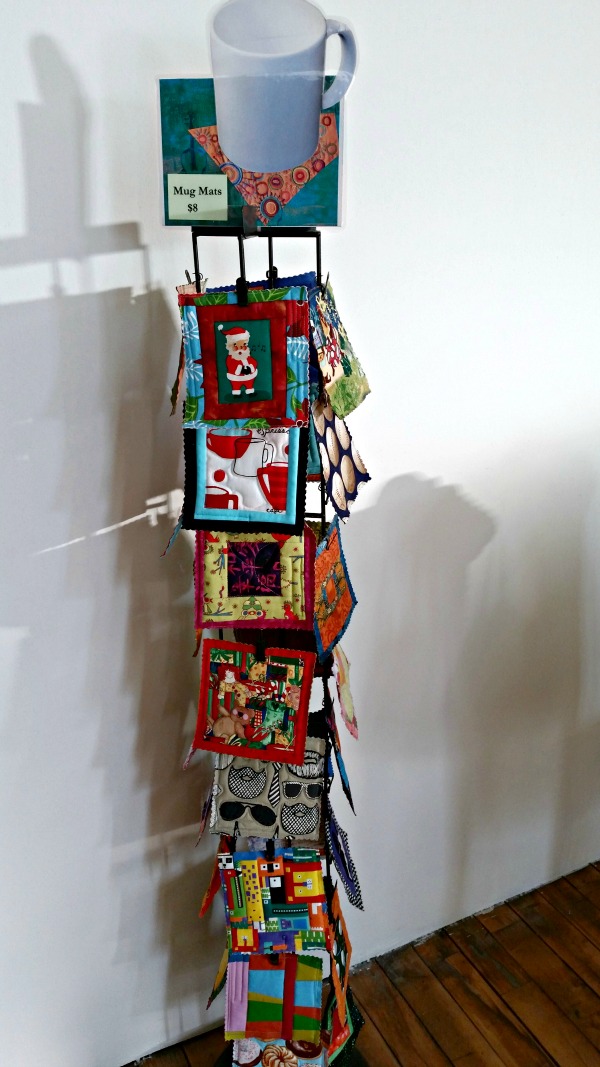 Lynette A. Griffin is the Journalist Extraordinaire at AccuQuilt, and if you have a quilting story to share, she wants to hear it at lynette.griffin@accuquilt.com.