Quilting in the Genealogy Pool

Did you ever wonder where your love of quilting came from? If you were lucky enough to have a mother or grandmother to teach you to sew and quilt, it probably never crossed your mind. However, if you had a mother who wouldn't even sew on a button and grandmothers that you never knew, how you developed the love of quilting might be a mystery. I know it is to me.

From an early age, I tried making clothes for my dolls. In high school the mandatory home economics class almost stripped me of any interest in sewing after my apron received a D grade. Who knew that an apron had to fit all the way around your waist?

Then one day in college I saw an article in a magazine with instructions on how to make a log cabin quilt. From that moment on I was a "quilter" and later a textile designer. My other great passion was reading.

In the last few years I have dabbled in genealogy. As I've traced  the family lines back, I've been fascinated by the male proper names that appear again and again, generation after generation. Women on the other hand, became increasingly invisible as I navigated back through time. Who were these people, these nameless men and women who bequeathed me the genes that made me a living, breathing quilt maker?

I may have found the answer in a book that my mother has kept hidden for years in her safe. (That's another story, entirely.) The book was written by a relative of hers in the 1920's and details much of her family's history with pictures and oral accounts from her ancestors and the people that knew them. The story of one remarkable woman may have answered many of my questions. 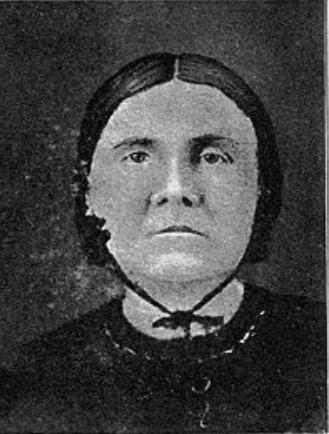 Elizabeth Matlock was my two-times great grandmother. She was born in about 1823 outside of Nashville, TN. She married James White, a widower with two children when she was 24 and he was 44. Elizabeth and James had an additional 11 children. Here is an account of her life from one of her grandchildren taken from my mother's book.

"He (James White) needed a wife for his children and he courted Elizabeth Matlock. She was the bright jewel of that country if traditional stories are a criterion.

She was very gifted and her specialty was work; her virtues were cleanliness and correct living; her religion was Presbyterian; her ambition was lineage to follow her.

There was not an indolent atom in her body and she was as proud as a queen. If perchance it had fallen to her lot to grow up in this new country had not her grandmother brought from the east silk worms. She fed them the mulberry leaves that nurtured life and brought into existence, so as to be used, the cocoons, and spinning six of these small fibers into one, she procured silk thread and this she wove into cloth, and then made into her own wedding gown. She carded the cotton or wool, spun it into thread and knitted her own stockings. So fine was this silken cloth woven, that she could pull one width through her thimble. These were the wedding clothes of our grandmother in this, then, new settled country.

When her husband had accumulated a sufficiency, still she spun and wove as work was her religion. Her handiwork was the admiration of all. To all her children when they married, she gave ample bed spreads, quilts and bedding material to start in life with and at home had many more.

Her own were destroyed by fire which burned the home prior to her death. Her incessant and never relenting work went on until she died. In the distribution of her handiwork, as it has passed on to posterity, it was our good fortune to have handed down to us one of her works of this character. "

Unfortunately, Great-Great Grandmother Elizabeth's quilts did not get passed down to me. What a treasure that would have been.

Was her quilting gene passed to me. Well, possibly. Was I gifted with her incessant and relentless need to work? Nope.

Great-Great Grandfather James was described as, "an easy going man who in his idle moments had a feast in reading. Books in those days were scarce articles and he had more books than others and he was a great reader. Some months before his death the house was burned and with it, all his books perished. "

How sad to think of Elizabeth losing her quilts and James his books near the ends of their lives. However, if Elizabeth's real ambition was "linage to follow her" she succeeded. Elizabeth and James had over 50 grandchildren.

Which brings us back to the question of a "quilting or reading gene." When you look at a family tree that traces back generations, and you see all of the people that have contributed to your genetic makeup, you realize how impossible it is to trace your being to just one individual.

No, there's no documented quilting or reading gene. Our interests likely come from outside influences such as teachers, friends, media and a host of other influences.

Still, sometimes when I look at patterns on a row of fabrics, or caress the fine leather binding of my Kindle, I wonder. Are there whispers of memories from ancestors long ago that have hitchhiked on my chromosomes? Are they enjoying the view through my eyes and touch? It's a conundrum.

So on to the next mystery. How did my nameless (for now) great-great-great grandmother get silk worms to pass on to her daughter? I'm guessing she was abducted by pirates on her journey to the New World. The pirates had booty from a Chinese junket full of silk worms and gold and she grabbed some silkworms (they were more interesting than gold) as she was being rescued by the famous privateer Captain Kidd.

That's just a guess. I'll let you know what my research turns up.