What You Didn't Learn in College About Vintage Sewing Machines

In case you missed this blog post the first time by artist and quilter Mary Lee, we are bringing it back. Don’t miss out on this must-read for all quilters!

I took out my camera and headed in. This was a mystery that needed to be explored!

I had stumbled upon a wonderful and very unique business called AllSaints.  AllSaints is based in London and has over 130 branches all over the world. One thing became apparent right  away: AllSaints doesn't sell sewing machines. It sells men's and women's clothing. This is a unique retail clothing company  committed to saving our important past by recycling old sewing  machines for another use. 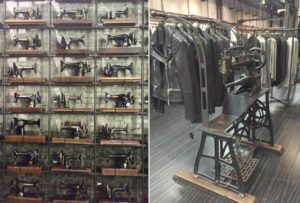 Saving and incorporating vintage sewing machines into their store displays was initiated by the founders of AllSaints. The machines are intended to represent the craft, artistry and premium quality that is the core of their brand. The sewing machines have become the most recognizable icon of their business.

The machines are beautifully and creatively displayed, and the front display is similar in all the store locations. All of their store fixtures and fittings are built in-house using recycled materials.

Walking through the store it is obvious that the major focus has been placed on these vintage machines. Over the years, AllSaints has reclaimed the machines used in their displays from antique fairs and factories that have closed down. The majority of the machines are no longer serviceable, and many of the parts cannot be replaced today.

With over 100 different machines in each store, that's over 13,000 that are still in existence thanks to just one company! They have rescued these machines and preserved the memories of a time long ago.

Each sewing machine manufacturer from the past provided a stepping stone for the companies that make the machines we love using to sew our quilts today. Through the process AllSaints, headquartered in London, has become a unique, one of a kind, successful business. Not only do their philosophies and concepts keep the company firmly rooted to its heritage in Europe, but they also provide stitches to help keep us better connected to the past.

It seems that most of the vintage sewing machines displayed in this store are from European companies, including most of the Singers. While the majority of the brands seem to be Singers, there were three brands with hand-crank models that I was unfamiliar with. I did a little research on them and here is a short history of each.

In 1858, brothers John and William Jones designed and built the first of many Jones and Company sewing machines in England.  With no import fees the pricing was much lower than other brands and the quality was quite impressive. These arched body machines were nick-named "the Serpentine" (also called cat back and swan neck.) The oldest Victorian models are highly collectable and recognizable by their curved neck, gold decal and metal gears on the base (Ebay prices $300+.) 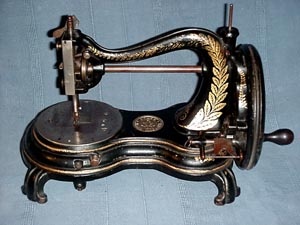 Princess Alexandra of Wales use and endorsement of the Serpentine quickly increased the demand. This model is identified by a stamped badge on the round cloth plate reads, "As supplied to The Princess of Wales." (Selling on Ebay $500 to $1500.)

The Fiddlebase (with base shaped to resemble a fiddle) was also a popular machine and was copied by other competitors over the years.

The brothers expanded their business by adding industrial machines and creating a branding opportunity for any retailer or importer who ordered 100 machines. These machines displayed a round or oval brass plate with the agent's name and logo. These dealer branded models can be more difficult to identify as Jones and Company machines. 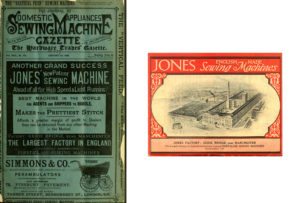 Experiencing phenomenal growth, employing over 1,000 people and in business over 120 years, Jones and Company is considered to be one of the most successful companies of its era. The company was purchased by  Brother in 1968. What was once the largest selling sewing machine company in England, is now the Brother machine made in Japan. Interestingly, there is a Jones Sewing Machine Company in Peoria, Illinois. No relation.

Frister and Rossmann was a German manufacturer in business from 1864 to 1925. With offices in London, the machines were sold all over England and were very popular in Harrods Department Store of London. Exporting the machines created a tremendous growth in sales. In 1886 the company reported sales of 500,000 machines! For 38 years this was the largest sewing machine manufacturer in Germany and even though they were taken over by another company in 1902, all the machines continued to carry the Frister and Rossmann name.

Some of their more unique machines are accented with mother of pearl inlay. Decals with gold leaf of delicate florals can be found on many machines. Even older models with worn decals still hold their value today. The company is also known for its "Fiddlebase Machine," easily recognized by the fiddle shape of the machine base. Fiddlebase machines may sell for around $1,000.

The Vickers Company was a successful industrial company and manufacturer of machine guns and aircraft during WWI. They unexpectedly decided to enter the sewing machine market with the express intent to destroy Frister and Rossman of Germany. Because they aggressively went after the sewing machine home market in 1917 with a more elegant machine, their mission was soon accomplished. They built a superior product with a 10-year warranty that lasted generations.

The oldest of these machines can be difficult to find and expensive to purchase. One much sought after item that the company made was the cream-colored model. With the onset of WWII and more competition in the sewing machine industry, the company ceased production in 1929 and returned to their previous business focus. Ironically, Vickers only lasted a few more years than Frister and Rossman.

For years sewing machine companies in Europe came and went. And there were MANY, which explains why so many unrecognizable brand names are seen on the vintage machines today. It seems as though each company began with a strategy to make a better selling machine and grow their market share to become more successful than their competitors. They all copied other models and were determined to "reinvent the wheel." The stories “seam” endless.

If you would like to see what happens to many machines, watch this video I found on YouTube.

It's an interesting way to end “Vintage Sewing Machines on Display!"

Mary Lee we roll along...

Mary Lee resides in Lexington, Kentucky. An artist in several mediums, she pursues folk art, painting, photography, jewelry making, quilt pattern design, and her favorite: quilting and collecting fabric. She has belonged to the same local quilting group for over 30 years and teaches classes in Kentucky and Tennessee. See her greeting card line at cardsbymarylee.com