Behind the Seams: The Story of Paducah 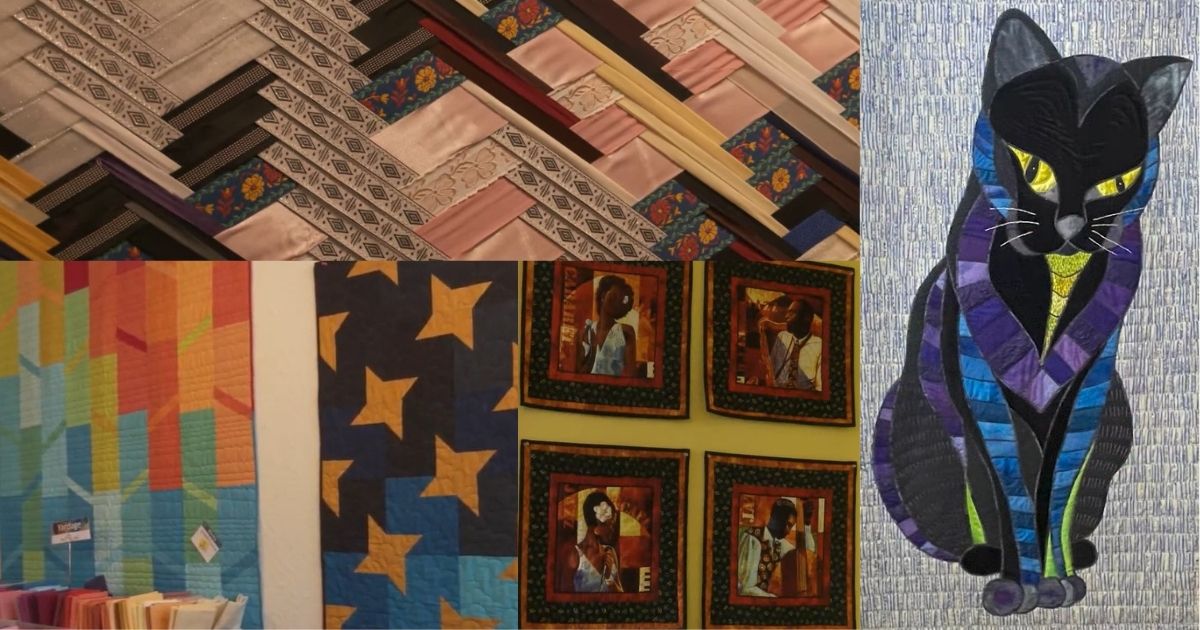 The AccuQuilt team had so much fun at the 2022 AQS QuiltWeek event that we wanted to share even more about this exciting experience!

Based on all of these conversations, it is evident that the town of Paducah has a rich history and a love for the arts. While part of this might be because of their artist relocation program, it could be that this quaint town in Kentucky has always had artists of varying media passing through or staying, but always sharing their love of the arts with others.

To learn about some of the famous individuals who have visited Paducah, Pam and Joe went to the Hotel Metropolitan to meet with the current owner, Betty Dobson.

According to Betty, the Hotel Metropolitan was founded in 1908 by Maggie M. Steed, a 24-year-old African American widow who had a vision of creating a safe place for African Americans to stay while in Paducah.

The hotel was open until 1996, and Betty illustrates how it saw its fair share of celebrated African Americans, including Cab Calloway, Duke Ellington, Ella Fitzgerald, Pearl Bailey, and B.B. King.

Unfortunately, the Hotel Metropolitan was condemned in 1999 since, as Betty stated, "the roof was about to fall in" and the original "aluminum siding was popping off because of the foundation giving way."

However, during this time, Betty was operating a small business with one of her friends, Shirl. Since the grocery stores were far away, the pair sold, among other things, candy to Paducahan children to prevent them from going into the local liquor store. They wanted to create a safer and closer place for the town's younger generation to frequent, which eventually led Betty and Shirl to the Hotel Metropolitan.

One day, Betty was approached by another Paducahan and he suggested that Betty and Shirl look into buying and restoring the Hotel Metropolitan. The women were hesitant at first due to the building's deterioration, but the man insisted that saving the hotel would preserve its deep connection to African-American celebrities and part of the town's history.

Today, the Hotel Metropolitan continues to accommodate guests, including some more well-known individuals. The Gee's Bend Quilters visit the hotel as guest speakers during Quilt Shows, and the niece of Danielle Colby, the Shop Manager on the History Channel's American Pickers, has come to stay. Due to this lucky coincidence, The Hotel Metropolitan was even featured on the show.

For more details about the Hotel Metropolitan’s history, check out this blog post from the City of Paducah’s website.

After their wonderful history lesson with Betty Dobson at the Hotel Metropolitan, Pam and Joe stopped at the Yeiser Arts Center to talk to the Center's Director, Lexie Millikan. 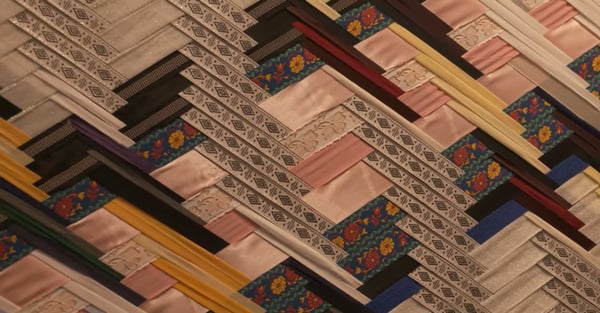 Lexie shared that the Yeiser Arts Center was formed in 1957 by Mary Yeiser, an artist, educator, lover of the arts, and world traveler. Mary Yeiser wanted to share her passion for and teach others about the arts. These goals have definitely been exceeded and continued. 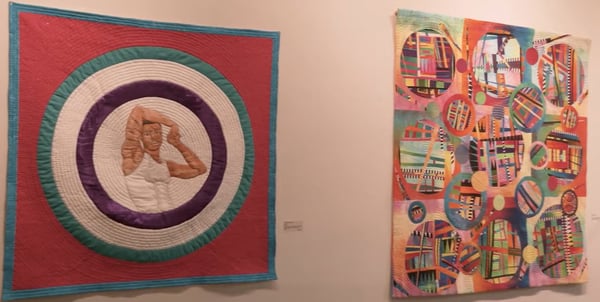 The Yeiser Arts Center holds rotating exhibitions each year, with Fantastic Fibers as the current one. This year marks the Center's 65th anniversary, as well as the 35th time fiber artists have been able to showcase their creations in the Fantastic Fibers exhibition.

Learn more about the Yeiser Arts Center with Lexie Millikan:

One of the local artists who has been featured in exhibitions at the Yeiser Arts Center is Char Downs. A self-proclaimed lifetime artist, Char came to Paducah through the artist relocation program 18 years ago and has seemingly never regretted her decision.

Since relocating to Paducah, Char has been able to elevate her artistic skills by combining different art media. She remarks that artists who have moved to Paducah, also known as Quilt City USA, "...is perfect because this area was ripe for different kinds of art - the combination of two kinds of art, both very ancient: painting and quilting." 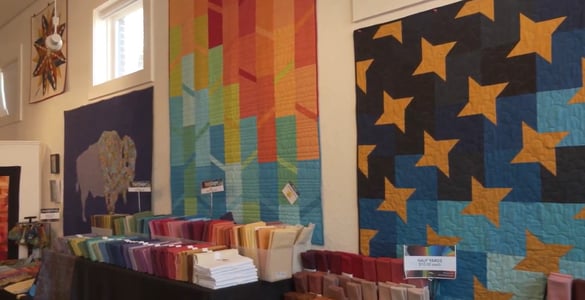 Char is usually busy at her Pinecone Art Studio working on projects, and she displays some of her artwork and hosts shows for other artists and sponsors in the gallery area. During the 2022 AQS QuiltWeek event, Cherrywood Fabrics had a pop-up exhibit in Char's studio to showcase some of their quilts and fabrics. Cherrywood Fabrics maintains a presence in Paducah year-round to continue inspiring local artists, but they make a larger appearance to promote even more creativity among quilters visiting Paducah for AQS QuiltWeek events.

Another creative individual who moved to Paducah through the artist relocation program, Rose Hughes is a native Californian who has been a fiber artist since the 1990s. Rose came to Paducah in 2012 since her husband's hometown and family are nearby, it is The Quilt City of the United States, "and [for] the fun art community."

While in Paducah, Rose has continued to enhance her artistic skills because becoming involved with a new art medium or activity means that "you take classes, you learn things, you meet people, [and] you solve the challenges of using different things." 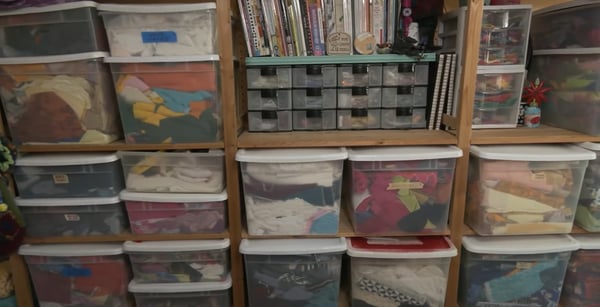 Even before relocating, Rose took her own advice to heart. When she still resided in her home state, Rose was the president of a quilting guild. She was lucky enough to be in the right place at the right time because Rose met the famous quilter, Paula Nadelstern, when Paula was in San Diego for her first show. Rose was able to spend multiple days with Paula, and they went to Los Angeles to visit, as Rose puts it, the city's "great fabric stores." 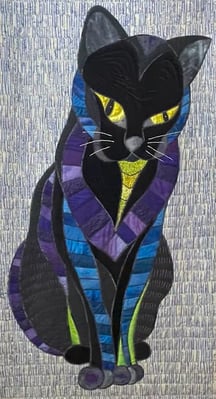 Today, Rose's stash contains a variety of fabrics, beads, and other artistic media. In 2012, she became a mixed media artist after attending classes and workshops that Ephemera Paducah owner, Kristin Williams, taught. One of Rose's most fascinating mixed media creations is her purple book: ravens, wings, feathers, nests.

The Quilt City or A City of Arts?

We're so glad that Pam and Joe were able to capture these special interviews, especially since we can share them with the AccuQuilt community! Clearly, Paducah, KY has a vivid history that is perfect for art lovers and those interested in learning about or trying different art forms.

While Paducah is known for quilting, it is obvious that the town's residents love to share their passion for all of the arts and educate anyone who is willing to learn about them. This is most likely due to the fact that, as Pam disclosed in her interview with Rose Hughes, "the quilting community shares, learns, and teaches."

Which interview is your favorite? Let us know in the comments below!