Quilt What You Love With Unique Style

Sometimes, you must tear something apart to rebuild it. This is how quilter and pattern designer Chris Marchini approaches his craft of sewing and quilting. 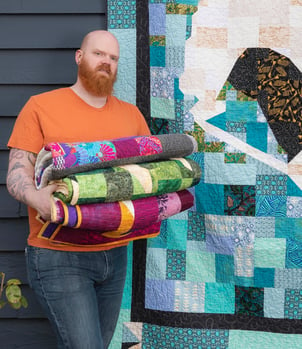 Chris’s passion for sewing began when he was eight years old, before dabbling in quilting as a teenager. Starting with simple square shapes, he soon advanced to a Crossed Canoes quilt, which he learned to make from a book he checked out from his local library.

His quilting journey took a years-long pause as he switched to focus on fashion design, leading him to the creation of a children’s clothing line. However, over time, as his children grew up, Chris fell out of love with fashion design.

Once he moved into his current home, his childhood hobby was renewed when he had a dedicated space for sewing in his own studio. Since then, he has made dozens of quilts, become a pattern designer, founded Rose City Originals and obtained quite the following on his Tik Tok, Instagram and Facebook pages. The best part of his quilting journey? Chris does not have plans to stop quilting any time soon.

Rediscovering a Passion for Quilting

AccuQuilt had the chance to interview Chris about his quilts featured in the AccuQuilt Quilt Gallery exhibit. Among other things, Chris shared his quilting journey, quilting preferences, an insight into his pattern designing process and more. Read on to hear Chris’s motivational story!

AccuQuilt: Where do you draw inspiration from most often?

Chris: All over the place really. My style tends to be a lot more goth or cottage core. It’s not really typical in quilting. You Should See Me In A Crown was inspired by the Billie Eilish song of the same name. It was sort of a hyper fixation of mine. It took me six days from the time of like, “Ooh, this would be a cool idea” to draft it out, create it, get it quilted, bound and labelled. Like, I was obsessed with it! 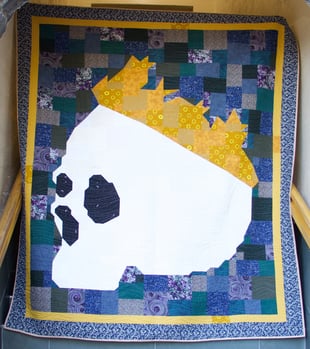 AQ: Wow! So, that’s where you find your inspiration for your themes, so how do you choose your fabrics and your colorway?

Chris: I’m really loose with that. I’m very scrappy. I try to find things that are the same value to make the background. In my [pattern] instructions, I always say, “As long as you have good contrast between the background, this crown, and the skull,” you’re fine. I have a Fat Quarter shelf that is in a lot of my TikTok videos – people love it. I have it sorted by color, so I’ll go to that general [color] area and pull out whatever I need. [The scraps I pick] don’t necessarily match each other, but I want [the quilt] to look scrappy.

AQ: I love that concept of scrappiness because as quilters, we always have scraps, and we have our stash. Your concept is phenomenal because it’s a great way to use those scraps. So, how did you choose the pieces that you wanted to share with our audience?

Chris: I’m fairly new to quilt designing. I’ve been doing it for maybe two and a half to three years. I’ve made a lot of quilts, but I wanted to showcase the ones that I designed.

AQ: Let’s talk about some of the projects that are part of our gallery. The first one that I thought was super cute is Mushie Throw #1. Can you talk about the inspiration for it and why you chose that particular colorway and pattern?

Chris: A lot of my style tends to get a little more on the goth-y side, a little dark, like skulls and stuff, so I wanted to lighten it up a bit, reach out to a broader audience. I thought mushrooms would be super cute. They still kind of fit my aesthetic, but they’re cute. I also wanted to do a smaller project. I really wanted to do a classic red toadstool, but not “red red.” I got reds that are a little more pink and it came together really quickly. I was really happy with that one. 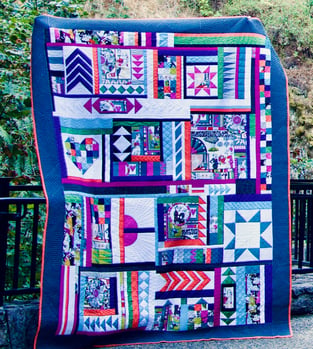 AQ: Basically, you can create a canvas and add any kind of shapes to the top to applique. What a great way to think about quilting and a way to bust up your scraps and use up your stash! The next one I just think is darling. It’s called Ghastlie Love, and it’s more like a sampler quilt than your other ones. Talk about why you decided to come up with a sampler quilt rather than your traditional solid backs and applique.

Chris: That one is called Ghastlie Love because it’s the name of the print from Alexander Henry. I only bought a yard. If you’re familiar with the Ghastlie prints from Alexander Henry, there’s really no good spot to cut them, like there’s not really a repeat that’s easy to spot where you can just cut squares. I didn’t want to lose the impact of the print, so I started cutting big chunks, then, smaller chunks. I thought, “How on earth am I going to put this together?” I started making random blocks to go with them – some stars, hearts, strips, and Flying Geese. I had zero plan when I started that quilt, but I love how it came out.

AQ: I think that the scrappiness of it is what I love the most. Sometimes, quilters get a little hung up on color – you know, it has to be all blues, or it has to be all greens. No, it can be blue and purple and orange and gray. The last one – I just love this one – is called Dead Like Me #1, so is there a #2 or #3?

Chris: I’ve made it three times, so this is the very first one I made. I love the way it turned out. That is the second quilt I designed in this style. The first one was a giant monstera leaf, which was just two colors, and this one introduced a third color because you have the skull, the background, and the shadows in the eyes and mouth. That was me pushing myself because I thought, “How can I make this work?” And I really liked how it came out. For that, I used, I think it was all Free Spirit fabrics, for the background, so it’s bright and fun and springy, and then a skull, so it’s like two different worlds coming together for that quilt. 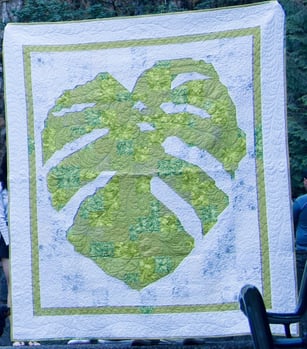 AQ: And if we have a viewer that is interested in starting one of your quilts, what is the one tip that you would give them?

Chris: I would say not to stress over the fabric choices. As long as you have that contrast between the different elements – the background, whatever the picture is – you’ll be fine. Just pick some Fat Quarters and start cutting!

GO! Pick What You Love

The way Chris embraces his preferences for modern quilting and scrap-busting provides him the continuous discovery of original and unique quilt designs. We hope Chris inspires you to create an exciting quilting style all your own just as he has!

Check out the full interview with Chris to learn more about his quilting:

What will you quilt next? Don’t forget to share your finished projects with us, @rosecityoriginals and @AccuQuilt, using the hashtag #AccuQuiltBuilt on social media. We can't wait to see what you create!