I get lots of questions about various aspects of machine quilting. Here are my answers to some of them.

How do you start and end your stitching when machine quilting?

Like every other technique in quilting, there’s more than one way to do this. 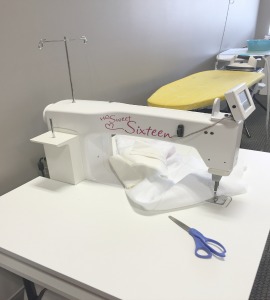 The method I use is to make 6 – 8 teeny, tiny stitches in the first (and last) quarter-inch of quilting. I learned this technique from Sue Nickels. She and her sister, Pat Holly, have won multiple Best of Show and other major awards over the years, which I take as an endorsement of this method (not to mention their meticulous workmanship and stunning designs!).

If you are using a walking foot, set the stitch length on your machine near zero. If you are free-motion quilting, YOU are the stitch length regulator, so simply move the quilt slowly enough to make those small stitches as you start (and end). Once you have quilted a bit beyond that area, trim both threads.

I realized when I was teaching machine quilting that I would say, “Make 8 – 10 small stitches” yet my handout read, “Make 6 – 8 stitches.” I left the contradiction in place and described which number to choose like this:

“If you’re the kind of person who can walk up to a mailbox and drop a letter in without checking whether or not it went down, use 6 – 8 stitches. If you feel compelled to double-check that the letter has dropped (like Meg Ryan in When Harry Met Sally), use 8 – 10 stitches.”

You can use the same rule of thumb.

This small-stitches method does not work quite as well when using a thicker (30-wt. – 12-wt.) top thread. It is too heavy to make those little stitches without bunching up a little too much for my liking. In that case, I position my needle a quarter-inch beyond where I want to start. I take two or three normal size stitches backward, then sew forward right over those same stitches. As before, I trim the threads when I get beyond the spot where the tails come up so I don’t sew over them later. When I get to where I want to stop, I make 2 – 3 backstitches over the quilting.

To eliminate those tight, extra stitches, I know some meticulous (and/or professional) quilters will simply start quilting and later knot and bury the thread ends in the batting with a needle (a self-threading needle is a big help here), pulling the knot below the quilt top. I confess I have never done this and probably never will. But this is a technique favored by some longarmers I’ve spoken with who are custom quilting show quilts.

Speaking of heavier top threads, those of us who have been around long enough to have taken sewing in Home Ec classes probably remember the teacher repeatedly advising us to, “Use the same thread in the top and in the bobbin. Make sure they match!”

Fly in the face of that memory!

If you are using the same thread to quilt as you used to piece, then fine. BUT, if you’re using anything else, be it a heavier decorative or especially a metallic thread, then use a lighter-weight/thinner thread in your bobbin. It allows that thicker thread to flow more smoothly and it cuts down on the bulk the threads add. (And if you think thread doesn’t add weight, try picking up a heavily quilted quilt some time and compare its weight to the weight of an unquilted quilt of the same size. You’ll be surprised at the difference!)

One of the advantages of quilting with a thinner bobbin thread is that if the thread color is even close to the color of your backing fabric, it will all but disappears.

My favorite bobbin thread is Libby Lehman’s Bottom Line™ 60-wt. polyester (YES, you can use polyester and cotton together!) by Superior Threads®. I worked at a quilt shop that carried Bottom Line, so I have just about every color they ever made. Another option is Alex Anderson’s Masterpiece 50-wt. cotton, also by Superior (which I buy when I don’t happen to have the color I need in Bottom Line).

Now a question for you. Ever wonder why the heavier weights are indicated by smaller numbers?

However, this wasn’t always the most accurate or consistent way to go, what with variations of skein sizes and maybe the weights not coming out exactly on the ounce. So the Tex system was developed to, ideally, standardize thread weight designations.

The weight in grams of 1000 meters of thread is its Tex number. The heavier the thread, higher the Tex—just the opposite of earlier thread-weight designations (as if things weren’t confusing enough!).

How can I keep bobbin thread from bunching up on the underside of my quilt when I start machine quilting?

The trick to keeping the bobbin thread smooth on the back of your quilt is to bring it up to the top of your quilt before you start stitching. I’ve never met a machine that isn’t happier having that bobbin thread held out of the way when it begins to stitch.

You do this in the same way that you bring the tail of the bobbin through the machine’s throat plate when you’re threading your machine.

If I end my quilting stitching somewhere in the middle of the quilt (to change threads or to move to a different section), how can I trim off the thread without having to burrow under the quilt to cut the bobbin thread?

This is a trick I learned from Caryl Bryer Fallert-Gentry, another winner of too many major awards to count.

After you’ve made those teeny ending stitches (whatever number of them you choose to make), take one more machine-basting-size stitch. Raise the presser foot and pull the quilt a few inches toward you, out from under the foot, then push it back a bit to create some slack in the bobbin thread. That longer stitch right at the end will enable you to use the top thread to pull a little loop of the bobbin thread up to the surface of the quilt. It will be enough to enable you to trim it, along with the top thread.

Linda's past and present roles in the quilting world include teacher, lecturer, judge, and quilt shop staff member. She also completed stints as program chair for both the Artful Hands Quilt Guild and the Rhododendron Needlers Quilt Guild, in Mansfield and Walpole, Massachusetts, respectively.

Additionally, while working as a senior editor at the American Quilter’s Society for nine years, Lasco edited many books and stand-alone patterns. She also wrote the quilting book, Red, White & Quilted, published in 2014.

If you have questions for Linda, please send email them to content@accuquilt.com