The Quilt in the Attic (A Quilt Romance)

So you want to know how I found the love of my life? Well, you might say that a quilt brought us together. Don't laugh. You go ahead and drink your coffee and I will tell you the story. I have to warn you, it's a long story. You might have to come over again to hear the ending.

This is how it all started.

The day couldn't have been more beautiful. After being snowbound for the last couple of months, I was finally going

to explore my new neighborhood. The smell of spring was in the air and I was more than ready to leave behind the gloomy weather and the equally gloomy past few years. It was a new beginning.

Divorce is never easy and when it comes after 35 years of marriage...well, it was an uprooting that I thought I would never recover from.

But, recover I did. I moved to a new city, bought a pretty little cottage, and started working part-time at a quilt shop within walking distance of my new house. I couldn't be happier I told myself. The problem was that "myself" didn't always listen.

So, I set off one morning to walk through the historic neighborhood that my tiny house was situated in. Large trees and massive houses lined the streets. At one time, many of them would have been my dream houses. Now, all I could think about were all those rooms to clean.

One house in particular caught my attention. It was a three-story white mansion complete with a turret and and a curved wrap-around porch. The porch had the requisite porch swing and wicker chairs that looked nearly as old as the house. As I walked closer, I could see that the paint was peeling and it was looking a little (really a lot) in need of love.

The front yard was surrounded by a black iron fence, overgrown with prickly bushes. Not just bushes, I realized. They were rose bushes gone wild. There must have been hundreds of them in bloom at one time. Imagine how beautiful that must have been, I thought.

I heard the sound of clipping before I saw the man doing the clipping. A white-haired man, tall, slender and immaculately clad in pressed blue jeans and long-sleeved shirt, was trying to hack through the overgrowth surrounding the fence.

"You're telling me. I thought about having them all pulled out. But, it seems like worth the trouble, if they can be saved," he said.

"Good for you," I said. "Ironically, my name is Rose. I'm your neighbor from down the block. I just moved into the little yellow house. I suppose those would have been the servants' houses for all these big mansions in the day. "

"It's nice to meet you, Rose. My name is Paul. This house has been in my family since the mid-1800's. I'm living here with my brother. We're trying to get the place fixed up to sell. It looks like it might take us the rest of our lives to get it cleaned out."

Paul asked, "So do you think you would have been the downstairs maid or maybe the cook if you lived in that house a hundred years ago?"

Laughing, I said, "Well, I guess we are lucky to be where we are. It was nice meeting you, Paul. Good luck with those roses."

"Thanks," he said. "I've always thought roses were beautiful."

Hmmm, I thought. I wonder what he meant by that? He must have been talking about the plants. Still, I felt myself blushing.

The next day after work, I was feeling that a walk would be good for me. If I just happened to run into Paul, maybe I could learn some more history about the house.

I saw him clipping away.

"Boy, you've made some really good progress," I said.

"Thank you," he said. Then he turned around and started clipping again.

Feeling dismissed, I started on my way. No wonder, I said to myself. You're acting like a goofy teenager.

The next morning I decided to walk on the opposite side of the street.  He was probably just having a bad day, but I had my fill of moody men. It was silly to be interested in the first man to batt his baby blues at me anyway.

I was half way down the block when I heard someone call my name. Paul came running across the street.

"Wait, Rose. I have something for you." He handed me a beautiful red rose.

"I was waiting for you to come by. Listen, there's a coffee shop just down the block. I was wondering if you would like to join me for a cup of coffee?"

So, I did. We had a wonderful time and learned about each other's lives. Paul was a widower. His wife had died five years before. His younger brother, Peter, was also retired. Peter had never married and had been an archeologist and traveled all over the world. When they inherited the family home, they decided to live together while they restored the house.

I told Paul of my failed marriage and my new life. I shared my love of quilting, reading and traveling. I had the best time, and was feeling the first real glimmer of an exciting new future. When we parted, I gave Paul my phone number and he said that he hoped to see me again soon.

A couple of afternoons later, I thought it might be nice to take some freshly baked cookies over to Paul. If he was in the yard, I would give them to him. If not, I certainly wasn't going to knock on the door. I would probably just take them home and eat them (every one of them.)

I was amazed when I saw that the roses were almost all cleaned out. He must have been at the job day and night to make such progress.

"I can't believe how much you've accomplished," I said. "I brought you some cookies that I made this morning. I hope you like chocolate chips."

"Hello," he said. "I'm sure that's very kind of you. However, I really can't take cookies from a stranger. I was taught that at an early age."

"Okaaay," I replied. "I wouldn't consider myself exactly a stranger. We talked for at least two hours just the other day. If you don't like chocolate chip cookies, just say so and I'll be on my way."

"I love chocolate chip cookies. In fact, they're my favorite. However, I don't know you and don't know why you are trying to give me cookies. Although, I have to say that you are very pretty."

At this point I knew something was seriously wrong. Maybe he drank too much, maybe he didn't take his meds. Maybe, I should just find my way home...quickly.

"Okee dokee. Leaving now. Backing away. Good luck with the roses. Not bothering you with cookies anymore. Adios."

After that harrowing encounter, I came to the conclusion that I didn't have the fortitude to continue to get to know Paul. I noticed his number on my caller ID a couple of times, but I never answered and I never called back. I didn't walk by his house anymore. In fact, I never walked in that direction.

"Please, Rose may we come in," said Paul.

I opened the door and they came in.

"Rose, I'm so sorry. I neglected to mention that I have an evil twin named Peter. I believe you have met, although you've not been formally introduced. Peter, don't you have something to say?"

"Yes, Rose. I'm here to apologize for letting you think that I was Paul. Although, I never did say I was Paul. He told me all about meeting you at the fence and I thought I would have a little fun. I'm particularly sorry about missing those cookies."

"I thought you said you had a younger brother," I said to Paul.

"I am younger. By five minutes," said Peter.

Peter held out the box. "I found this in the attic. Paul said that you like quilts and I hope that this will help you forgive me. I really do think you are pretty. Sorry, Paul."

Paul gave Peter a stern look and said, "Don't you have something else to say?"

When Peter left, I turned to Paul. "I just can't believe this. It never occurred to me that there were two of you!"

"Well, there aren't two of me," said Paul. "All the while we were growing up we would try to take each other's girlfriends. I'm of the mind that we are too old for that now. I certainly hope that he hasn't taken you."

"Oh, I don't think there's any way that's going to happen. May I look at the quilt?"

We opened the box and I was shocked at the beauty of the quilt, but then I started laughing.

"Do you know what this quilt pattern is called? It's Robbing Peter to Pay Paul."

Well, that's enough for now. Next time you come by, I will tell you the story of the quilt and how it changed my life. Maybe we'll have some cookies to go with that coffee.

Suzan Ellis is the Director of Content at AccuQuilt. She loves quilters, quilts and quilting. And, she would love to hear from you!

Subscribe to our blog at the right and we'll notify you when Part 2 is published. 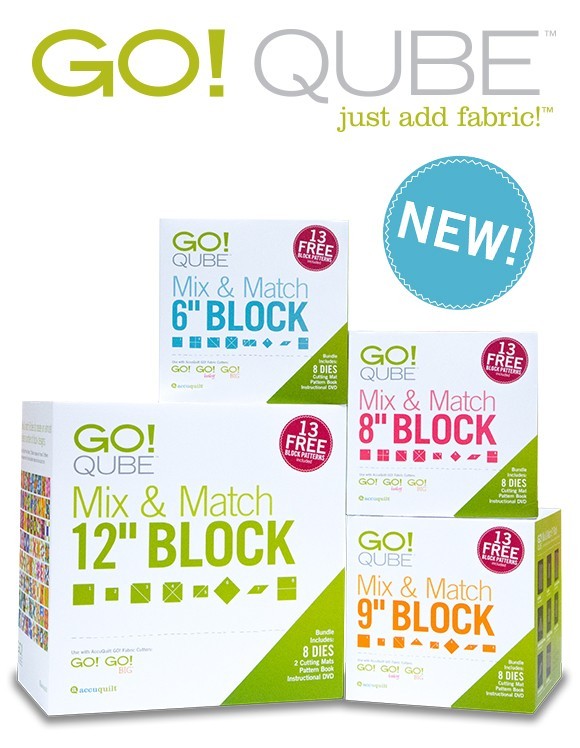